Sisyphus and the One Name 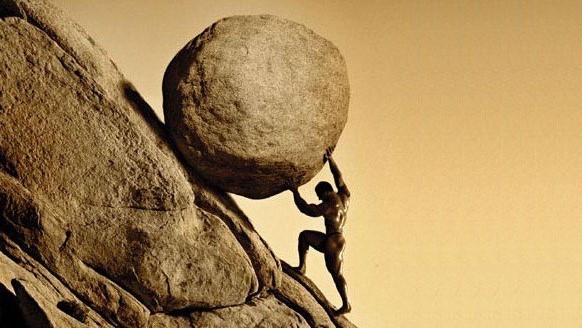 I can think of no darker words than these two: no hope. Craig Biehl called them the two unbearable words. He writes: “Two small words. When heard on the battlefield, in the hospital waiting room, or in our darkest thoughts, they bring despair. Two words that carry such anguish that no one can withstand their power … where no hope exists—we are undone.”

Have you ever spoken to someone without hope? The despair is deep and all encompassing. But the truth, hidden from the eyes of the world, is that, without Christ, we are all without hope.

It’s understandable, I think, that the devil would do all he can to prevent unbelievers from coming to terms with this. And so he does. Scripture tells us that the “god of this world” (literally, the ‘god of this age’) blinds “the minds of the unbelievers, to keep them from seeing the light of the gospel of the glory of Christ” (2 Corinthians 4:4).

Were the world to see things as they truly are, even for a moment, they would sink into a hopeless despair.

Many of history’s deepest thinkers – especially the existentialist philosophers – thought long and hard about the seeming absurdity of life. Kierkegaard, Sartre, Camus – all of them walked to the edge of the abyss and peered in. None of them liked what they saw.

Camus explored the question of life’s absurdity in his book, The Myth of Sisyphus. You might remember the story of Sisyphus. He was the figure from Greek mythology who was condemned to the futile task of forever pushing, pushing, pushing a boulder up a mountain only to watch it roll back down again. Life is absurd like that, he argued. So, in his book, Camus thought he need to suggest reasons, considering how absurd life is, for one not to take his or her own life!

Existentialism argues that the problem of the absurdity of life can only be resolved by finding a purpose to live. Among them, only Kierkegaard came to see God as that purpose.

Many of these deep thinkers were brought to a place of utter despair by their agnosticism/atheism. Jean-Paul Sartre called this realization of life as it truly is ‘nausea’ and made it the title of his famous novel about existential angst.

But here’s the thing: they were right. Life is absurd, life is meaningless, life doesn’t make sense – without God, that is. Why were they brought to this point of despairing? Because, unlike most, they actually bothered to ask the questions. Most do not.

Most move through life going from one point to another, one job to another, one promotion to another, being entertained into imbecility, and being far too distracted to ever ask what life is really all about. If perchance they did – if they ever, like these thinkers before them – found their way to the edge of the abyss and peered in, they’d see in its mirror their own hopelessness, their own lostness.

And that would be seeing things aright. For Holy Scripture could not be clearer: without Christ, there is no hope. For “there is salvation in no One else, for there is no other name under heaven given among men by which we must be saved” (Acts 4:12).

One name, not many.

And the reason for this is clear enough: He and only He paid the terrible price for our sins. He died for us; He died as us. And He rose again from the grave to show all the watching universe that death had no power over Him.

Billy Graham once said, “For the believer there is hope beyond the grave, because Jesus Christ has opened the door to heaven for us by His death and resurrection.” Amen and amen!

This astonishing truth caused the Apostle Peter to exclaim: “Blessed be the God and Father of our Lord Jesus Christ! According to his great mercy, he has caused us to be born again to a living hope through the resurrection of Jesus Christ from the dead, to an inheritance that is imperishable, undefiled, and unfading, kept in heaven for you, who by God’s power are being guarded through faith for a salvation ready to be revealed in the last time” (1 Peter 1:3-5).

We must remember as we move through the world carrying this message of hope that those who oppose us – criticize us, persecute us, ridicule us – are not as much mean-spirited as they are lost. Lost, just as you and I were once lost. They are without Christ, without hope, and without eternal life. But they are lost people that God wants to find.

Jesus prayed for those who were crucifying Him, “Father, forgive them, for they know not what they do” (Luke 23:34). Exactly. And those who would hurt us in some way don’t really understand what they’re doing either. The Bible calls them blinded.

They’re without hope, they just don’t know it yet.

He wants us to repay hostility with compassion and abuse with love – a love that “does not take into account a wrong suffered” – praying as we go that it might please the Lord to visit salvation upon them.

And so we bring this message of hope to the unwitting hopeless, bearing in our hearts God’s promise that “those who turn many to righteousness [will shine] like the stars forever and ever” (Daniel 12:3).

“For we do not wrestle against flesh and blood, but against the rulers, against the authorities, against the cosmic powers over this present darkness, against the spiritual forces of evil in the heavenly places” (Ephesians 6:12).