Dying for Lack of One Smile 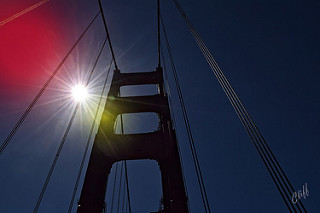 in Priorities, Walking With God

In September of 2000, Kevin Hines was sitting on a crowded bus visibly distraught and wondering if even one person would notice him and ask if he was okay. No one did. He arrived at his planned destination the Golden Gate Bridge. He began the mile and a half walk across the bridge along with hundreds of other people enjoying the breathtaking view atop this beautiful landmark. His emotions were all over the place. As he reached the center of the span, he was caught off his guard when an attractive woman approached him, handed her camera to him and asked if he would snap a few photos of her. Without question, he did.

He handed the camera back to the woman and she turned and without another word, walked away. Kevin watched her leave, then climbed over the rail and jumped off the bridge. His body plunged 25 stories till it struck the cement-like water below. He survived.

I listened to Kevin tell his heart wrenching story in person at an event intended to inform community care givers how to identify suicidal warning signs among the hundreds of people struggling with undiagnosed mental illness. The overall theme of the event was to help people “Change Direction.”

“I didn’t want to kill myself that day,” said Kevin. “I had to.” He went on to tell how most people who are planning to end their lives often develop a suicide pack with themselves saying things like, “If someone does this, I won’t go through with it.” Or “If anyone says that to me, I will.”

Kevin asked his listeners, “Imagine how it is possible that at this very moment someone could be deciding to end his life based upon whether or not a single person gives them a smile?”

Kevin Hines did not question what he had to do that day, even though it was going to mean falling 225 feet to his death. He knew he must do it. That was his only motive.

Imagine if you and I, with a clear and healthy state of mind, completely set on pleasing our Lord were to exhibit such steadfast determination to do what must be done. No hint of wavering, no bargains, or no looking back!

A disciple who makes “I must do” decisions when called upon to do so by the Lord is demonstrating the highest level of faith, devotion and obedience.

Without a second of doubt or reservation, no consideration for self-preservation or reputation, that disciple is never to be compared with the ordinary garden variety of self-proclaiming Christians.  They are among the few who are willing to lay their lives to the ground in the most special garden of all, Gethsemane .

In this passage Jesus appears to call people to fellowship with Him in three different areas of life.

1.  Being wholly dependent on the Father’s provision

2.  Living life completely by the leading of the Holy Spirit

3.  Enduring loss to all that this world has to offer

If you would like to watch Kevin Hines’ complete story you can find it at kevinhinesstory.com.