Conversation with Nicodemus I: ‘You Must Be Born All Over Again from Above!’ 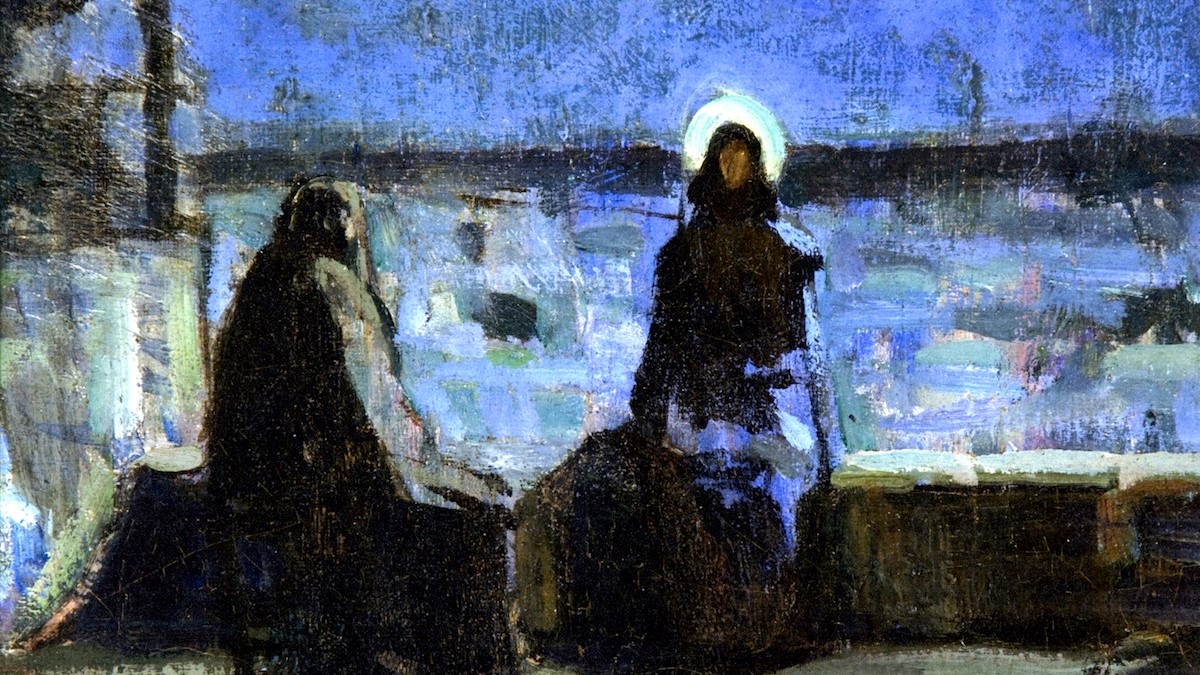 John chapter 3 is one of the most beloved portions of the New Testament, and for good reason. It treats matters of life and death. How can I enter the kingdom of God? What does it mean to be born again? What’s that even look like? With such grave questions to be answered, we must approach this conversation with care!

The final three verses of John chapter 2 serve as an introduction or prologue to chapters 3 and 4:

“Now when He was in Jerusalem at the Passover Feast, many believed in His name when they saw the signs that He was doing. But Jesus on his part did not entrust Himself to them, because He knew all people and needed no one to bear witness about man, for He Himself knew what was in man.”

So, after declaring that Jesus knew what was inside of every person, John set out to prove it with two case studies: A Jewish man in chapter 3; a gentile woman in chapter 4.

The first case study is a male – a prominent, influential male. His name is Nicodemus. Jesus has him completely pegged before he utters a single syllable. He knows his innermost thoughts and his deepest need. And so, Jesus will completely ignore the Pharisee’s flowery introduction and cut right to the chase: “Truly, truly, I say to you, unless one is born again, he cannot see the kingdom of God” (John 3:3).

The second case study is a female. A gentile woman, a Samarian. She’s a marginalized social outcast with no influence whatsoever. She’s unnamed. Jesus will encounter her at a well at high noon. Jesus has her pegged too. He knows exactly what she’s thinking, and what she’s hiding. He knows her innermost thoughts and her deepest need. After a short theological discussion about worship, He’ll speak a few words that will astonish her: “Go, call your husband, and come here.” The words will pierce her very soul and propel her to go and evangelize her entire village (John 4:16).

“There Was a Man … Named Nicodemus”

John 3:1: “Now there was a man of the Pharisees named Nicodemus, a ruler of the Jews.”

Nicodemus is a Pharisee, a leader in the most serious of all Jewish religious parties. They are the ‘separatists.’ In fact, the very word ‘Pharisee’ [Φαρισαῖος] is derived from an Aramaic word which means ‘separated’.

The Pharisees flourished during the 1st century BC and into the 1st century AD. They were marked by their strict interpretation of, and observance to, the Mosaic Law, as well as to the traditional ceremonies and practices of Judaism. Unlike the Sadducees, they believed in life after death and in the coming of the promised Messiah.

But, while deeply religious, they were also replete with hypocrisy – a hypocrisy that Jesus will expose in due time (see Matthew 23).

Nicodemus is a prominent member of this party – a “ruler of the Jews.” In fact, just a few verses from now, Jesus will call him THE teacher of Israel (John 3:10).

“We Know that You are a Teacher Come from God”

John 3:2: This man came to Jesus by night and said to him, “Rabbi, we know that you are a teacher come from God, for no one can do these signs that you do unless God is with him.”

Now, a lot has been made of the fact that Nicodemus came to Jesus “by night.” Perhaps, Nicodemus was afraid to be seen with Jesus, so he came in stealthily. Or, maybe he simply wanted to approach Jesus at a time when He’d be less busy, more available, unrushed. We don’t know for sure.

What we do know, though, is that John likes symbolism! And night and darkness often have a deeper significance in John. At the Last Supper, John tells us that when Judas left to betray Jesus, “it was night.” Well, of course it was! They were celebrating the Passover meal. Everyone would have known that it was night. It would be like saying, ‘The sun was shining in its strength and it was daytime.’ John’s meaning is clearly deeper: the hour of darkness was coming (John 13:30, cf. Luke 22:53, John 1:5).

Nicodemus approaches Jesus respectfully: he calls Him, “Rabbi.” He seems to be speaking for others as well: “WE know you are a teacher come from God” – and in the Greek, this is emphatic (“from God” comes first in the sentence)!

But Nicodemus’ faith that Jesus is “from God” seems to be less than a saving faith. He does not yet understand that Jesus is the true God who has come down from Heaven!

He calls Jesus a “Teacher’ – and Jesus is certainly that. But He’s far, far more than that! The Buddha was a teacher – and Lao Tzu, and Confucius and even, later, Mahatma Gandhi.

Nicodemus ‘believes,’ but this faith won’t save Him. ‘No, Nicodemus, that won’t do! Accepting Jesus as a Teacher alone, even a great Teacher, will never lead to salvation.’

This is important to keep in mind when we tell others about Jesus. When we ask if they believe in Jesus and they say, ‘Yes,’ we must be sure to follow it up with, ‘WHAT do you believe about Him?’ Jesus put it this way, “Unless you believe that I am he you will die in your sins.” (John 8:24b) So who is HE? He’s the One sent by the Father to bear our sins.

“Unless One is Born Again”

John 3:3: Jesus answered him, “Truly, truly, I say to you, unless one is born again, he cannot see the kingdom of God.”

“Born again” doesn’t quite capture Jesus’ meaning here. “Again” translates a Greek word that has a double meaning. The translators of the ESV admit as much in the margin: “the Greek is purposely ambiguous and can mean both again and from above; also verse 7.”

So, the word [anothen/ἄνωθεν] means “again” and “from above.” I think both meanings are important to round out Jesus’ thought. We need nothing less than a brand-new birth, and that re-birth is something we can only receive as a gift from above, not as a result of any human effort. Literally, we need to be “born all over again from above” (see Bruner, The Gospel of John: A Commentary, Grand Rapids, Michigan: Willian B. Eerdmans Publishing, 2012).

The Amplified Bible translation tries to remedy the problem by rendering it this way: “I assure you, most solemnly I tell you, that unless a person is born again (anew, from above), he cannot ever see … the kingdom of God.”

First, Jesus is making sure that we know it’s not just about Nicodemus, but it’s about every single human being including you and I. He’s reaching for the entire world! He’s essentially saying, ‘This is true for you, Nicodemus, and it’s true for everyone born of Adam!’

Second, He’s showing us that kindness and respect are important virtues in seeking the lost. Peter wrote that we are to “honor Christ the Lord as holy, always being prepared to make a defense [give an answer] to anyone who asks you for a reason for the hope that is in you; yet do it with gentleness and respect …” (1 Peter 3:15). Jesus is modeling this for us here.

John 3:4: Nicodemus said to him, “How can a man be born when he is old? Can he enter a second time into his mother’s womb and be born?”

Nicodemus, this prominent teacher of the Jewish people is clearly bewildered. I just hear his confused sigh, “How”?

Nicodemus seems to be saying, “Jesus, you are pointing me in the wrong direction; I want to know how to go forward, not how to go backward and start all over again.” Nicodemus is almost saying, “What’s wrong with the distance I’ve come? Why are you suggesting a whole new beginning? I don’t like your implication. Yes, candidates or beginners need a new start (if that’s what you mean by being ‘born’). But do the advanced? Give me a little credit” (Bruner, ibid.).

“Born of Water and the Spirit”

John 3:5: Jesus answered, “Truly, truly, I say to you, unless one is born of water and the Spirit, he cannot enter the kingdom of God.”

What does Jesus mean by being “born of water and Spirit”?

Certainly not water baptism. I think we have to reject any connection between the new birth and the ritual of water baptism. I find this view highly offensive to the Gospel. Baptism is important, but it comes later. I agree with Calvin who writes: “I cannot at all bring myself to believe that Christ is speaking [here] of Baptism” (John, 1556, vol. 1, pp.64-65). But many mainstream denominations – especially those which baptize infants – prefer this answer.

Nor does “born of water and Spirit,” as I once believed, speak of two births: one natural, signified by the breaking of water; one supernatural accomplished by the work of the Spirit. The Greek doesn’t support this view (the sentence is constructed with a single preposition [ἐκ] connecting the two nouns ‘water’ and ‘Spirit’). In other words, it’s describing a single event, not two. Jesus is not saying, ‘Unless one is born out of water (on the one hand) and out of the Spirit (on the other).’ He is saying, ‘Unless you receive a new birth, one that is of water and the Spirit, you cannot enter the kingdom of God.’

So, what does He mean? I think Jesus is referring to a promise in Ezekiel that was precious to all Jews, one that connects “water” and the Spirit.” Nicodemus, THE teacher, would certainly have memorized this important passage!

So, by referring to this passage, Jesus is essentially saying, ‘Nicodemus, don’t be shocked by what I’m saying! This is exactly what God has promised through the prophet Ezekiel!’

Flesh is Flesh, Spirit is Spirit

So, Jesus tells the bewildered Pharisee, “Do not marvel that I said to you [singular], ‘You [plural, ‘you all’] must be born again’” (John 3:7, brackets mine).

“So, it is with Everyone who is Born of the Spirit.”

John 3:8: The wind [πνεῦμα] blows where it wishes, and you hear its sound [φωνή, voice], but you do not know where it comes from or where it goes. So it is with everyone who is born of the Spirit [πνεῦμα].”

Interestingly, the words “wind” and “Spirit” in this verse translate the exact same Greek word, πνεῦμα. “Wind,” “breath,” “spirit” – all the same word in the Greek.

How do we know? Because we feel the glorious effects of having been breathed upon by this invisible and incomprehensible ‘wind’ of the saving-God!

Could you explain it to someone else?

Remember, Jesus said, “unless one is born again from above, he cannot see the kingdom of God,” so this is really important!

How do you know?

Is it true of you?