The ‘Greatest’ Doubter Who Ever Lived? 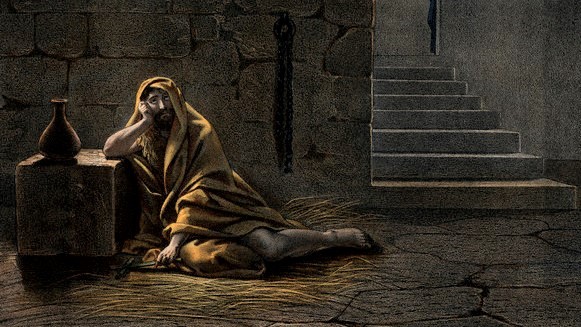 John the Baptist is clearly among the most remarkable people who have ever lived.  He was Jesus’ forerunner, preparing the sinners to repent and receive their Messiah.

John’s portrait of John the Baptist is quite different from that of the other three gospel writers. We don’t read about how he dressed or what he ate in the Gospel of John. We don’t find him calling folks to repentance or hear him explicitly declaring that “the kingdom of heaven is at hand” in John. These are all true things, but they’d already been said In Matthew, Mark and Luke – and John seems to be writing to supply what was lacking in the first three Gospels.

John the Baptist is (without controversy) a towering figure, even above others we find in the Sacred Text. He was the subject of important Old Testament Messianic prophecy (Isaiah 40). His birth was due to the direct and miraculous intervention of God Himself (Luke 1:7, 13). He was “filled with the Holy Spirit even from his mother’s womb” (Luke 1:15). He was a man specifically “sent from God” (John 1:6). He was sent to prepare the way of the Lord (Matthew 3:3).

And, as if all that weren’t enough to establish his fame, Jesus Himself said, “Among them that are born of women there has not risen a greater than John the Baptist” (Matthew 11:11).

Quite a resume, right?

His fame caught the attention of the religious leaders of Israel who dispatched envoys to find out what this desert preacher was up to – who he was.

And this is the testimony of John, when the Jews sent priests and Levites from Jerusalem to ask him, “Who are you?” He confessed, and did not deny, but confessed, “I am not the Christ” (John 1:19-20).

The spiritual ignorance of these leaders is on display here in Technicolor! These were the ones who were supposed to be speaking for God, yet they had no idea what God was doing. Clearly, John is fulfilling the prophecy of the Prophet Isaiah (that the Lord’s forerunner would appear preaching in the wilderness), but they had no clue who he even was.

But, how could they have known that John was THAT guy? Simple: he told them he was! Keep watching.

These were reasonable questions for them to ask John. There are prophesies in the Old Testament which promise Elijah’s return before the “great and dreadful day of the Lord” (Malachi 4:5-6). So, many Jews expected Elijah to show up at some point. ‘No,’ John said, ‘I’m not Elijah’ (although, in a way, he was – see Matthew 11:13-15).

He said he wasn’t ‘THE Prophet’ either (Greek = Ὁ προφήτης). This question was a reference to ‘THE Prophet’ Moses promised would someday come in Deuteronomy 18:15-18.

This was a prophecy about the coming of the Messiah. ‘Nope,’ says the Baptist, ‘I’m not Him either.’

Can you feel their frustration beginning to grow?

‘Then who in God’s round earth are you?’ they asked.

He could have said, truthfully, ‘I’m the son of the priest Zachariah and his barren wife Elizabeth’ or ‘I’m the one who’s been filled with the Holy Spirit since I was yet in the womb!’

But he chose none of these. Instead, he said, “I am a voice.”

So, they said to him, “Who are you? We need to give an answer to those who sent us. What do you say about yourself?” He said, “I am the voice of one crying out in the wilderness, ‘Make straight the way of the Lord,’ as the prophet Isaiah said” (John 1:22-23).

The Baptist identified himself as the ‘promised voice’ bellowing out in the wilderness calling sinners to make way for the Lord. The world had waited some 700 years for Isaiah’s prophecy to see fulfillment. Isaiah put it this way: “A voice cries: In the wilderness prepare the way of the Lord; make straight in the desert a highway for our God” (Isaiah 40:3). And now, here he was.

He was baptizing people for the repentance of sins in the desert – a literal dessert and a spiritual one too. He wasn’t concerned with Temple preaching; he knew God’s presence (the Shekinah Glory) didn’t dwell there anymore. He didn’t go about setting up meetings with the Pharisees or the Sadducees or other religious leaders. No, he went into the wilderness, and just started preaching. And God brought the people to him. The Apostles John and James, for instance, would have had to journey some 70 miles from their fishing boats to find him in the dusty desert. But they came. Many, many came.

John was “a” voice (not, “the” voice; the NASB has it right, Ἐγὼ φωνὴ). And while John’s voice was the specific fulfillment of a promised voice which would appear before the coming of the Christ, all of God’s children – you and I – have “a” voice too. And God has given us (1) a message and (2) an opportunity to cry out into our own wilderness.

And, of supreme importance, we’re to use our voice to obey the Master’s command in Jesus’ parable: “Go out to the highways and hedges and compel people to come in, that My house may be filled” (Luke 14:23).

John knew who He was and he faithfully served the Lord. And that makes the questions he wrestled with while languishing in person all the more remarkable.

Questions from a Prison Cell

John sensed that his ministry was coming to an end. “He must increase,” he said, “and I must decrease” (John 3:30). Shortly after saying this, he was arrested. He’d been very public in his criticism of the king and his wife, who were unlawfully married. Then as now, these types of people don’t readily welcome criticism! So, John had to trade the spacious blue sky and the fresh air, and the cool running water and wide-open spaces that had been his home, for a dark, oppressive dungeon and there he began to question a few things. We might imagine some of the thoughts that ran through the mind of this great man …

‘God, what are you doing here? Why am I locked up? Have I misread the clues? I was expecting to see the Kingdom come rushing in, but where is it? Couldn’t I be more useful to You if I were free? Have I misheard Your voice or imagined the Holy Spirit’s descent? Is Jesus truly the One the world has been waiting for?

J.A. Martin writes that “John had had a meteoric ministry which lasted for no more than a year. [He] expected that the Messiah would set up the kingdom as he had been announcing.” But that hadn’t happened yet. Instead, he was about to be put to death. He didn’t understand. He knew the Bible and all the Old Testament prophecies about the coming King, but he didn’t see the kingdom coming.

Standing where we are, 2,000 years later, John’s questions seem unimaginable to us. But the truth is, we’ve all been there. Every believer has had moments of doubt and questions. May not about whether God was there, but certainly about what He is doing!

But, that’s OK! While Jesus enjoins us to believe and not doubt, He also invites us to reason together with Him and to strengthen our faith (John 20:27; Isaiah 1:18).

Knowing Where to Go with Our Questions

John the Baptist did it right. He knew what to do with his questions – and there’s a lesson here for us too.

Now when John heard in prison about the deeds of the Christ, he sent word by his disciples and said to him, “Are you the one who is to come, or shall we look for another?” And Jesus answered them, “Go and tell John what you hear and see: the blind receive their sight and the lame walk, lepers are cleansed and the deaf hear, and the dead are raised up, and the poor have good news preached to them. And blessed is the one who is not offended by me” (Matthew 11:2-6).

Oh yes, Jesus was the One! But, remember, John had already PROCLAIMED that He was! So how did Jesus respond to John’s question? Did He rebuke John for having a lapse in faith? Would He ridicule him for asking an honest question? Not at all! He met John right where he was and He answered his questions. (And he’ll do that for us too!)

Then, after John’s disciple’s left, Jesus began to speak about the man who was wrestling with his questions in prison.

No. John was no vacillating prophet, no reed shaken and blown here and there by every wind – even though he had some questions. He was a faithful man working it out. And he knew just where to bring His questions: to Jesus. Shouldn’t we do the same?

What are some of these ‘faith’ questions?

How have you resolved such questions in the past?

Practically, what are some of the ways we can bring our questions to Jesus?

What would it be like to serve a God who condemns those who question?

What does this tell us about the gracious God we serve?

Does this story resonate with you?

How is it that a person can truly ‘believe,’ yet need help with his or her ‘unbelief’?

Consider the Lord’s response: He rebuked the unclean spirit, saying to it, “I command you, come out of him and never enter him again.” Jesus took him by the hand and lifted him up, and he arose.

What does Jesus’ response to this father’s belief/unbelief show us about His heart toward us?

What does this statement reveal to us about how Jesus views us in our weaknesses and short-comings?

Colossians 3:9-10  “… you have put off the old self with its practices and have put on the new self, which is being renewed in knowledge after the image of its Creator.”