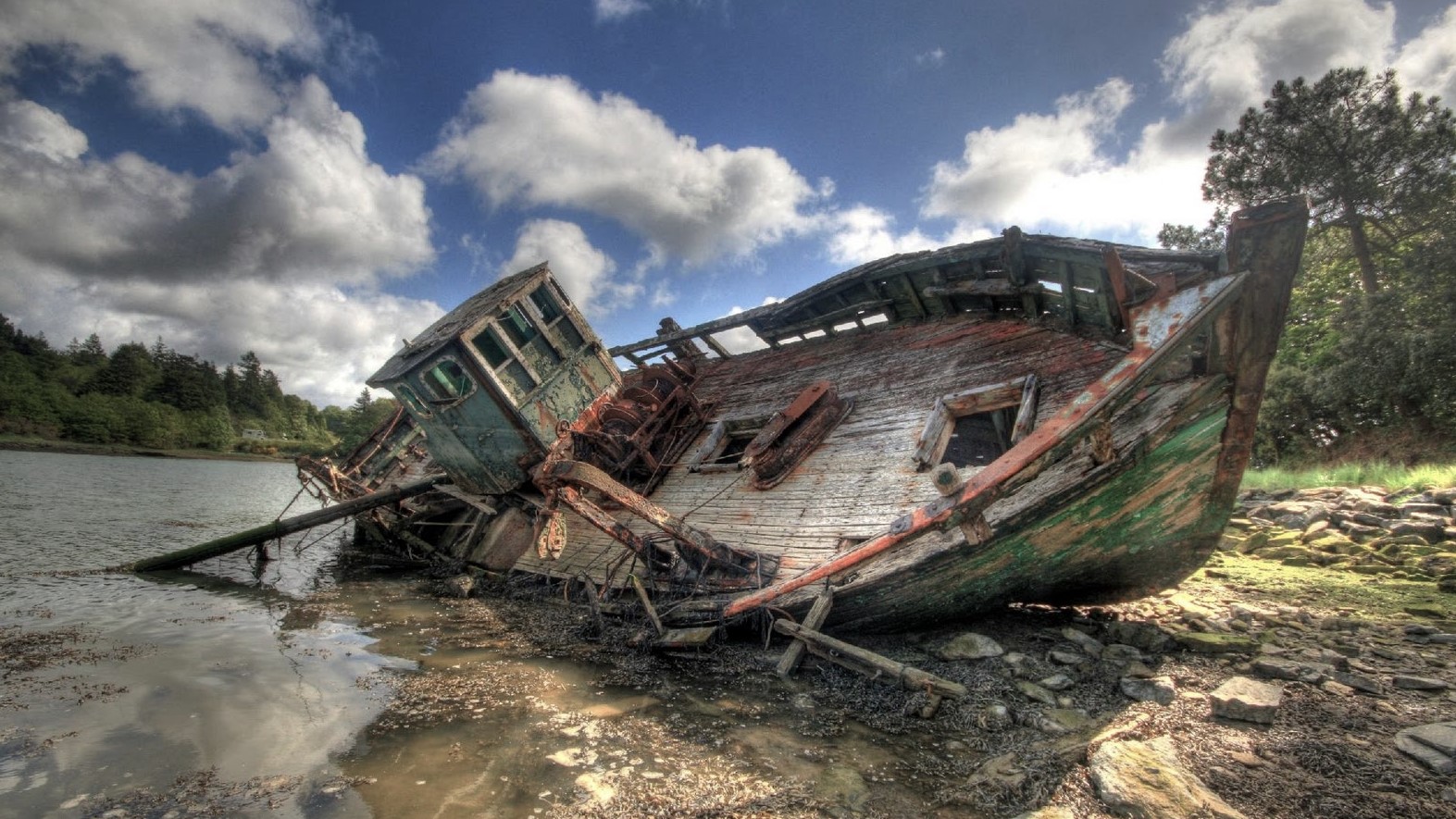 In 1 Timothy Paul tells of a shipwreck. Not of a first century wooden ship piling her hull upon the rocks, mind you, but a shipwreck nonetheless. And one no less terrifying than any of the nautical disasters that have become so famous.

“This charge I entrust to you, Timothy, my child, in accordance with the prophecies previously made about you, that by them you may wage the good warfare, holding faith and a good conscience. By rejecting this, some have made shipwreck of their faith, among whom are Hymenaeus and Alexander, whom I have handed over to Satan that they may learn not to blaspheme” (1 Timothy 1:18-20).

Let’s summarize: Some had suffered a spiritual shipwreck by failing to hold on to the faith and a good conscience. The result was stunning: they’d been delivered over to the devil to be taught a lesson! Two of them are called out by name: Hymenaeus and Alexander.

Delivered Over to Satan

We know that Hymenaeus (and another man, Philetus) “swerved from the truth” by embracing false ideas about the resurrection. Paul says they were “upsetting the faith of some” (2 Timothy 2:17-19).

“Paul’s prescription” for the two blasphemers Alexander and Hymenaeus was, according to A.D. Liften, “that they be handed over to Satan, a phrase which perhaps refers to excommunication from the congregation and abandonment to realms controlled by Satan. Paul viewed the congregation as a haven and protection for believers without which they would suffer painful disadvantage” (Bible Knowledge Commentary, vol. 2, pp. 733-734).

The truth is, whenever our faith is shipwrecked, we are delivered over to the devil in a very real sense. We can’t lose our salvation, of course, but everything about our experience and goals change.

We begin to walk in his plan rather than God’s

We begin to submit to his will for our lives him rather than God’s will.

We begin to serve him and his purposes, albeit subtly.

We’ve been delivered over to the enemy. We’ve shipwrecked our faith.

We begin to fall in love the world all over again – the domain of Satan, the (small ‘g’) “god of this world.” This we do knowing full well that we’ve been warned: “Do not love the world or the things in the world. If anyone loves the world, the love of the Father is not in him. For all that is in the world—the desires of the flesh and the desires of the eyes and pride of life—is not from the Father but is from the world. And the world is passing away along with its desires, but whoever does the will of God abides forever” (1 John 2:15-17, cf. 21 Corinthians 4:4).

The slanderer, the liar, the very enemy of God has become our master once again.

We’ve turned from the truth and believed the lie.

And, all the while, were missing out on the precious blessings of life in the Father’s house. We’re shipwrecked!

Why the Titanic Crashed

Lots of things can lead to shipwreck. When the R.M.S. Titanic set sail on April 10, 1912, it was considered the safest liner ever made by the hands of men. An employee of the White Star Line famously boasted: “Not even God himself could sink this ship.” (Gulp!)

But we all know the story. The Titanic set out on its maiden voyage with 2,228 passengers and crew, many of whom paid a small fortune for the privilege of sailing in her.

But, when warnings of dangerous ice in the path ahead were received they were roundly dismissed. Everything changed at 10:40 PM when the luxury liner hit an iceberg on its starboard bow that opened it like a can of tuna.

Water rushed in as water does. Within three short hours, more than 1500 passengers had fallen to a watery grave. Just 705 survived.

The race was on to blame someone. How could this have happened? What went wrong?

The answer to these questions are hotly debated still.

They simply ignored the warnings – and ignoring the warnings is certainly at the root of all spiritual shipwrecks. Over and over again in the Proverbs we’re told something to the effect of, “My son, do not forget my teaching, but let your heart keep my commandments,” or “Do not despise the Lord’s discipline,” or “My son, do not lose sight of these—keep sound wisdom and discretion,” or “My son, be attentive to my words, incline your ear to my sayings” (Proverbs 1:11, 3:1, 3:11, 3:21, 4:20).

In other words, pay attention to the warnings!

The great tragedy of the Titanic is that it all could have been avoided by simply heeding the warnings and making the proper adjustments.

But, the truth is, lots of things can lead to shipwreck. Here are some that I’ve gleaned from various expositors of the biblical text:

Some shipwreck their faith because they’ve been hurt by someone or something (or even some church).

Some shipwreck their faith because they’ve been disappointed by life in some way. Things haven’t turned out the way they’d hoped. Mark it down: life’s storms can wreck ships!

Some shipwreck by wandering away from the truth of God’s Word. Paul tells us that Hymenaeus and Alexander crashed because they “put away” the faith. According to Dr. Alan Carr, the phrase means “to thrust something away” from one’s self. They’d pushed away the truth and embraced error. The result was devastating.

We can suffer shipwreck by allowing sin to creep in and go unchallenged. We easily fall away when we begin to rationalize sin. The famous comedian W.C. Fields (no devout Christian, to be sure) was once seen flipping through the Bible. “What are you doing reading the Bible, Bill,” someone asked? “Lookin’ for loopholes!” was his reply. When we allow a loophole here and a loophole there, before long we find ourselves sinking! The slide away from a fervent walk with Jesus is, more often than not, slow and steady. It usually begins subtly and may go largely unnoticed at first. But, before we even know what’s happened, we’re far away from the Father’s heart.

Sometimes tragedy comes when ships are allowed to drift. Small drifts can quickly lead to one enormous wreck! Drifting comes in a series of hundreds of tiny decisions of seemingly small consequence. A decision not to pray, not to make time for a devotional, not to read my Bible, not to gather with the saints, to absent myself from fellowship, not to serve others in some way, etc. These tiny decisions can lead to one big crash!

Some ships wreck because they’re overloaded. O, how the enemy loves to weigh down the people of God with burdens that God never expected them to carry! It’s no wonder then that Jesus said, “Come to me, all who labor and are heavy laden, and I will give you rest. Take my yoke upon you, and learn from me, for I am gentle and lowly in heart, and you will find rest for your souls. For my yoke is easy, and my burden is light” (Matthew 11:28-30).

Ships can enter a dangerous place by simply losing momentum. Have you lost steam lately? Are you making room for things in your life that would have been unimaginable in your earlier walk with the Lord? Which warnings are you ignoring?

Are you ignoring the warnings of God’s Word? One in particular comes to mind: “…be sure your sin will find you out” (Numbers 32:23b).

Has being hurt by someone or something drawn you away from God?

Have you wandered from the truth of God’s Word and allowed yourself to embrace error in some way?

Has disappointment tamped down your fervency for the things of God?

Are you allowing some pattern of sin to eclipse the purity of your walk with God?

Or are you allowing small drifts that can add up to one big crash? Decisions to neglect prayer, devotional time, Bible reading, serving, fellowship, etc?

Are you overloaded? Do you need to readjust to Jesus’ invitation/promise of Matthew 11:28-30: “Come to me, all who labor and are heavy laden, and I will give you rest. Take my yoke upon you, and learn from me, for I am gentle and lowly in heart, and you will find rest for your souls. For my yoke is easy, and my burden is light”?

Have you lost momentum lately? Are you making room for things that are not pleasing to the Lord?

Am I walking in his plan for my life rather than in God’s. Am I following his will or God’s?

Am I serving God’s enemy and his purposes in some way, even subtly.

Have I shipwrecked my faith? Am I in dangerous waters?

Have I turned from the truth to embrace lies?

Am I regularly missing out on the precious blessing of life in the Father’s house.