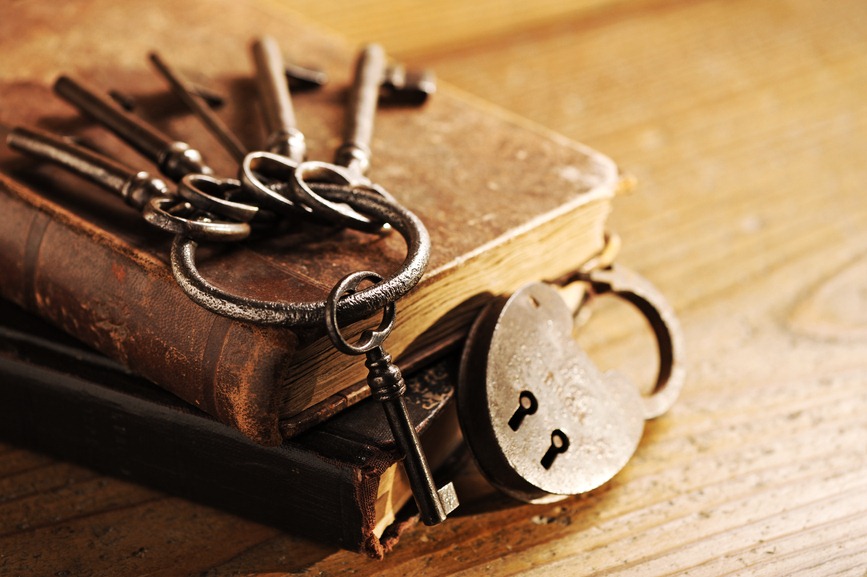 I have often wondered about the exchange between Jesus and Simon Peter in Matthew 16. You know those verses that tell how Jesus recognized Simon as being blessed to receive a revelation from God?  Then how He changed his name to Peter and told him he would be given the keys of the kingdom of heaven?

I can comprehend the word imagery Jesus used of keys and things being bound and loosed in heaven and earth, but understanding these concepts as Jesus intended can be challenging. Peter and the other disciples may have also been confused and it would be some time before they would come to understand the true meaning behind the keys and how and when to use them.

Scripture tells of a day soon after the Lord’s resurrection, of how Jesus appeared before the disciples saying, “Peace be with you.” Jesus offers a comforting greeting to the frightened group who were hiding from the Jews. He then confirmed His identity by revealing the wounds on His hands and side (John 20:19-20).

Moments later, Jesus will give the promise of the Holy Spirit He had previously offered to the disciples in Luke 11:13 “If you then, who are evil, know how to give good gifts to your children, how much more will the heavenly Father give the Holy Spirit to those who ask him!” In his commentary on John 20:22, Doctor J. Vernon McGee makes this observation:

“Our Lord had told the disciples about prayer back in Luke 11. He had said that if they would ask, it should be given to them. In verse 13 of that chapter, He says that He is speaking of the Holy Spirit which the heavenly Father would give to them who ask Him. Well, as nearly as we can tell they never asked!”

Jesus would no longer wait for the disciples to ask. They were going to need the Spirit and at that moment He “breathed on them” and said, “Receive the Holy Spirit.” Jesus would then go on to talk of forgiving and retaining sins, revisiting the function of the “keys of the kingdom of heaven” He had given to Peter earlier in His ministry (Matt 19:19). Keys that Peter and the other disciples would soon discover were invaluable to the ministry they were being called to.

Whatever measure the Holy Spirit was given that day, it was enough to embolden these once timid men to proclaim the Gospel as we see happening in Acts chapter 2. On the Day of Pentecost, Peter, standing with the others, held nothing back as he set to explain the supernatural phenomenon everyone was witnessing. It was as if he took hold of the keys given to him by Jesus and began unlocking truths which have been established with certainty in heaven, but till now had remained hidden behind the doors of dead religion and human unbelief.

Peter began his sermon quoting the Old Testament Scriptures as they declare the sign of the outpouring of the Holy Spirit with power, just as they were now beholding it. He used the Psalms of David and linked the prophecies of Samuel, Isaiah and Jeremiah to validate Jesus as the risen Christ and the one to fulfill the Davidic Covenant. Peter closed his sermon by charging the listeners with the blame for the crucifixion of their long-awaited Messiah!

Luke tells us in Acts 2:37, “When they heard this, they were cut to the heart.” The keys not only unlocked the truth, but cut deep into the heart of the hearers. Peter discovered that very day that the keys the Lord had entrusted to him were sharper than any blade honed by man. Peter and the disciples learned quickly that these “sharp keys” could immediately set loose what for years lay bound in darkness.

The sharp keys of the Word of God in the hands of the now Spirit-filled apostles would turn the world upside down. Proclaiming the atoning sacrifice of Christ’s death on the cross that provided the forgiveness of sin and assurance of salvation to those that believed. This verbal testimony of the apostles that would eventually be written in the Gospel record, would cut to the heart and reveal the depravity of the soul of man; how it was already bound in judgement so long as it remained un-regenerated and unwilling to be set free by the sharp keys.

Today, thousands upon thousands remain in bondage to sin never realizing the darkness that surrounds them. The effectiveness of the apostles teaching has never diminished even to our present age. The keys remain razor sharp and those who continue steadfast in their walk as disciples of Jesus Christ, learn just as Peter had, how and when to use them to unlock the truth and set others free.