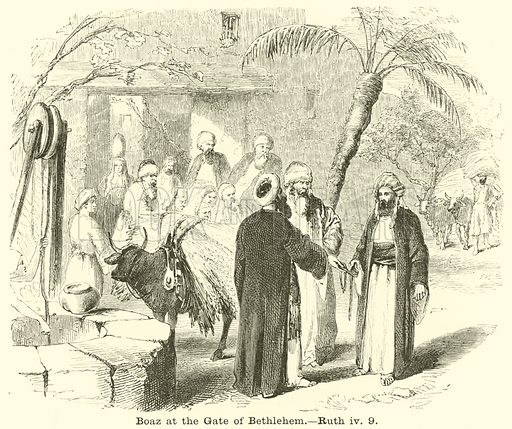 The story of Ruth and Boaz is a wonderful picture of the kinsmen redeemer. As Boaz (an Israelite) was to Ruth (a Gentile), Christ is to His Church. Christ (The Savior) is solely qualified to redeem hopeless foreigners (sinners).

Running alongside the theme of the redeemer in the story of Ruth, is the law of the Right of Inheritance, carefully observed by Boaz in order to ensure legal protection toward Ruth and her deceased husband’s estate. Ruth 4:1-6

Now Boaz went up to the gate and sat down there, and behold, the close relative of whom Boaz spoke was passing by, so he said, “Turn aside, friend, sit down here.” And he turned aside and sat down. He took ten men of the elders of the city and said, “Sit down here.” So they sat down. Then he said to the closest relative, “Naomi, who has come back from the land of Moab, has to sell the piece of land which belonged to our brother Elimelech. So I thought to inform you, saying, ‘Buy it before those who are sitting here, and before the elders of my people. If you will redeem it, redeem it; but if not, tell me that I may know; for there is no one but you to redeem it, and I am after you.’” And he said, “I will redeem it.” Then Boaz said, “On the day you buy the field from the hand of Naomi, you must also acquire Ruth the Moabitess, the widow of the deceased, in order to raise up the name of the deceased on his inheritance.” The closest relative said, “I cannot redeem it for myself, because I would jeopardize my own inheritance. Redeem it for yourself; you may have my right of redemption, for I cannot redeem it.”

It is interesting that the relative closer to Ruth seemed to have no problem purchasing the land as it would have been legal, and in his estimation, a profitable investment. However, when he was informed the contract of redemption would include taking in Mahlon’s widow, Ruth, it suddenly became a deal breaker for him. Why?

You see, according to the Mosaic Law, the relative would agree to redeeming all the accumulated livelihood of the deceased. In this case, this redemption involved not only assets, but the childless widow, Ruth. The law was carefully designed to preserve the life of the widow and continue the ancestral line of her husband through the kinsman redeemer.

The redeemer agrees to perform these responsibilities with the understanding that a significant portion of his investment would not be to his benefit. It was clearly to continue, as in this case, the estate and familial line of Elimelech and Mahlon through Ruth.

We are not told the motive behind his decision, but the relative closer to Ruth than Boaz, forfeited his right of redemption on the basis that it would, “jeopardize his own inheritance.” Perhaps he or others in his home were repulsed by the thought of a Moabite living among them? Maybe there really was a significant financial risk to consider? All we can conclude from Scripture is that for him, redeeming Elimelech’s property was good, adding Ruth to the deal was not.

As disciples of Jesus Christ, we are called upon to take on responsibilities where a measure of risk may be a factor. Could the risk injure our reputation? If we follow the way we’re being led it may leave others questioning our decisions.  Perhaps the perceived outcome will not be a blessing but a curse, having no financial benefit, in fact, it may even come at a significant cost.

In facing such decisions, we must always factor these into the equation. At the point of salvation you were a lost sinner who has been redeemed and instantly transported from the kingdom of darkness into a kingdom of light. You are cleared of a sentence of death and released to freedom and life. And if that is not enough, instead of remaining a hopeless orphan in a fallen world, you are adopted as a son or daughter. Pronounced an heir to the throne in an everlasting kingdom. And given an inheritance of both temporal and eternal blessings.

Having those facts in the background, is it any wonder that Jesus Christ would place an expectation on our receipt of His inheritance? That we would take seriously the responsibility to build His Kingdom for His Glory. That we would use the inheritance of gifts and abilities in pursuits that contribute to the benefit of the body of Christ and not ourselves? Make no mistake, God’s children who share in the inheritance of the saints are nothing less than stewards of God’s property working for the benefit of His kingdom, not their own.

The redemption of Ruth was too costly for the closer relative, but it was a price Boaz was more than willing to fulfill. Shouldn’t we, who have been blessed with so much more, have the same willingness, motivation and joy in our stewardship of His inheritance?