Lining Up the Dots 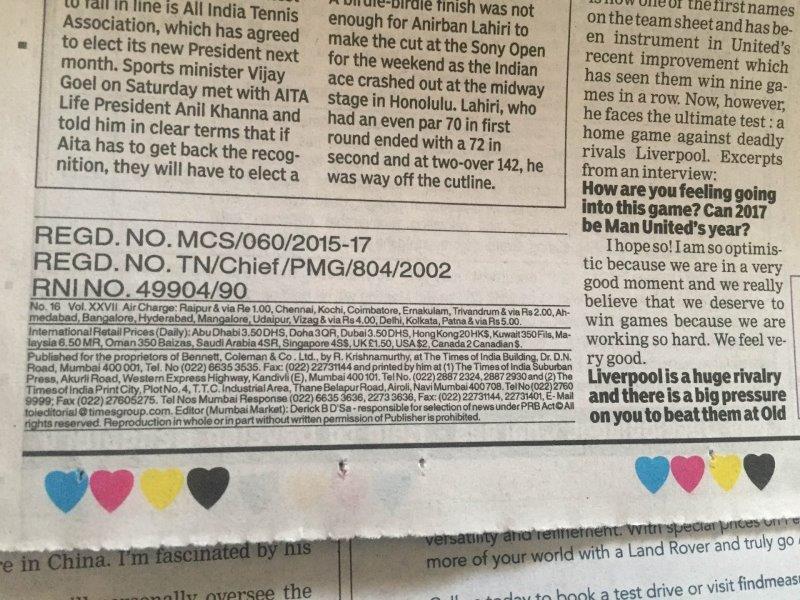 Have you ever wondered why there are colored dots printed on some product packaging or why four colored dots appear in the margins of newspaper print?

Those colors are called CMYK (cyan, magenta, yellow and black). They form the base colors for all colors used in printing. Basically, any color can be obtained by using these in correct proportions. Plates of all these colors are laid out on a page separately and lined up in the same spot while printing. This is necessary to print a full color page accurately. If the images appear blurry and not crisp enough, you will find the colors overlapping or not in line. On a smaller scale, home or office inkjet printers automatically run an alignment process when new ink cartridges are installed to ensure high quality images.

In a way, this alignment procedure is like the testing process the Lord occasionally requires us to pass through in life. Similar to lining up colored dots, God lays several options before us. He then trusts us to pray and apply wisdom while paying close attention to related principles within His Word, preparing us to proceed in humility and obedience in the direction he is leading. As it is when lining up the dots, when we follow God’s process in decision making, the blurry way becomes sharp, encouraging us to proceed with confidence that we are making a responsible choice.

Of course, this seems to work so much better in theory. Truth is, we don’t always follow every step. We might skip over the prayer “dot” and move ahead using human wisdom drawn from experience. Another dot is skipped when we don’t know God’s Word well enough to access and apply biblical truth in a current situation.

I’m not suggesting we need to pray and fast to decide whether to have pizza or Chinese food for dinner tonight. But the reality is, by hopscotching our way around God’s prescribed methods, we are willfully making ourselves vulnerable to irresponsible decision making.

One Bible character who did this for many years of his life was Judah, the fourth son of Jacob and Leah. His story spans 20 chapters in the Book of Genesis beginning with his birth in chapter 29 and ending with his father’s prophetic blessing in Chapter 49.

Being one of 13 children, his early years were no doubt filled with sibling rivalry. Judah grew up watching his mother desiring, but never acquiring, the affection of her husband Jacob, his father. The Bible records several of Judah’s irresponsible actions, the most significant being his suggestion to sell his younger brother Joseph to traveling nomads in Genesis 37, and later, failing to provide for his widowed daughter-in-law, Tamar, in Genesis 38.

Thankfully, midway through his story, God’s rescuing grace invaded Judah’s world. He turned what would have been an illustration of how to live life as a self-centered irresponsible creature of God into one of selfless servant-leadership. I admit, his is not the kind of story that just floats on the surface of the page. It takes careful thought and combing over small details that resist surrendering themselves in casual reading.

What I’ve gleaned from the final chapters of Judah’s story are a series of “dots” that serve as a guide to inspire responsible decision making. I’ve tried to keep them in the order they appear in the text including the portion Scripture from where they were drawn. I’ve also added brief observations and questions to encourage personal reflection.

We pick up the story in Genesis 43 as the grain from Egypt, acquired by Jacobs’ sons on their initial trip, had just about run out. Since the famine has continued, Jacob can no longer procrastinate and must send his sons back to Egypt for more grain. As the chapter opens, we discover that Reuben, the oldest son, no longer appears to be the leader. That position seems to have been filled by his younger brother Judah.

No longer the irresponsible person he used to be; Judah appears ready to lead his family through the remaining years of the famine. Little did he realize; he would first need to confront his sinful past. In doing so, he would provide one of the greatest stories of reconciliation in the Old Testament.

Below are seven characteristics of responsible leadership that we can learn from Judah’s interactions recorded for us in the Book of Genesis.

Q. How do you prepare to confront an emotionally charged situation with someone older than you? How has your level of responsibility increased with your age?

Q. What is gained by stewing over what could have been said or done differently following a matter? How much time do you spend contemplating how much better a situation would be if you simply altered the facts?

Q. Do the people closest to you know what your spiritual convictions are? Is it more advantageous for you to keep them in the dark simply because the truth seems too far fetched?

Q. What has disrupted your “happily ever after” that has tempted you to compromise a vow or pledge?

Q. How eagerly are you to extend mercy? Have you ever been in need of mercy and it was withheld? How did you respond?

Q. Recall a past situation where you were clearly irresponsible. If you were given a make-up test today, how different would the outcome be? Would you commit to seeking the Lord’s guidance to prepare for a second chance?

This final point presents a wonderful motivation for disciples of Jesus Christ to dedicate themselves to responsible decision making.

Q. When it is obvious that God is doing something wonderful in your life, do you still find things to criticize and complain about? Has God used this study to challenge you come to terms with your past if it will lighten someone’s burden?