Lessons from a ‘Christian’ Labyrinth, Part 1 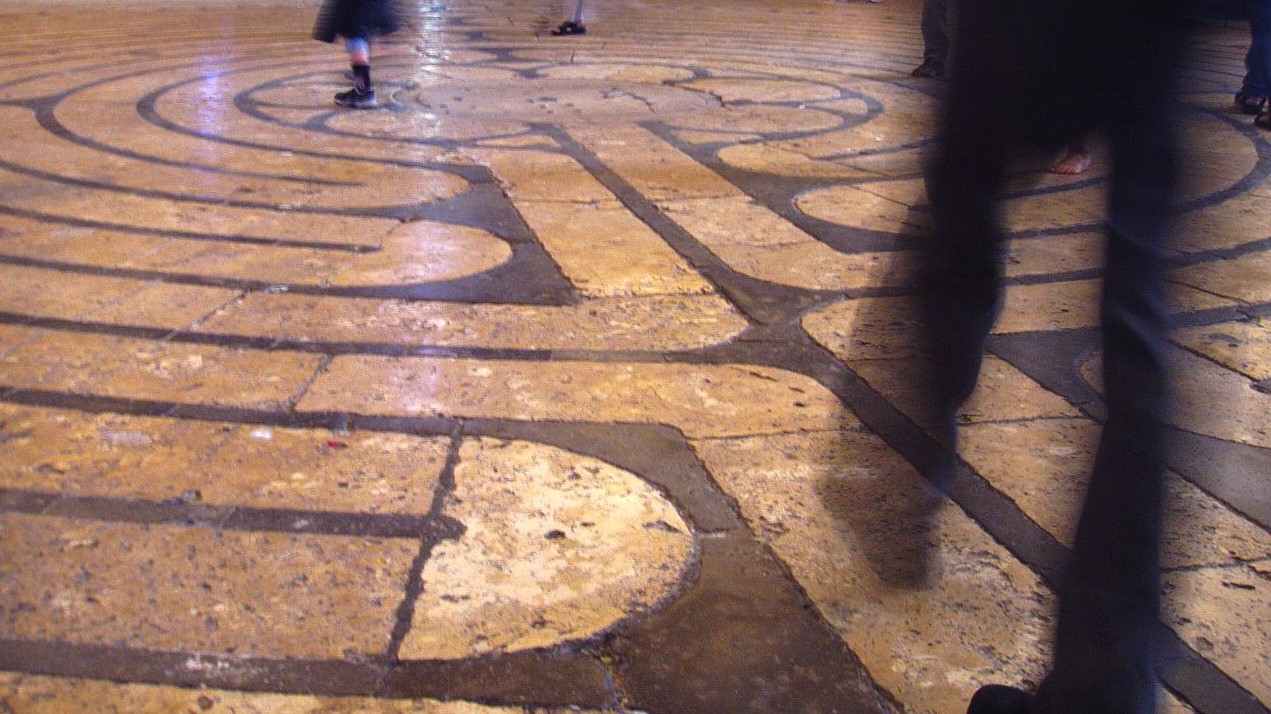 in Discipleship, Prayer, Walking With God

A labyrinth is a flat circle or square consisting of a path that winds around to its center. They’ve been found all over the pagan world. But, interestingly enough, they’ve also been found in churches (!) as far back as the 4th century. The earliest known example of a labyrinth in a Christian church dates from AD 324 in the Basilica of St. Reparatus at Orleansville, Algeria (Northern Africa).

Many of these labyrinths were set directly into the floor of the church, indicating that they may have been meant to be walked. Some strikingly feature the symbol of the cross, like the one at Saint-Omer, France. But the cross can be spied in virtually all of them because of a typical design which separates them into four equal quadrants.

All of this has led to many questions about why they existed in the first place and how they may have been used by Christians.

However, they do stand as curious artifacts of Church history. And I do believe they have something to teach us too. What makes the most sense to me is that, like everything else in the medieval cathedral, they were symbolic of something the church wanted the faithful to understand.

Everything about the medieval cathedral was designed to teach. The building itself was a picture of Heaven. Believers would leave their fields and their stalls and the dirt and muck of this world and step into ‘God’s house,’ so to speak.

So, what were these labyrinths trying to teach the faithful? I think they were saying something about the journey of the believer through life. Here are a few things I came up with. I’ll share three with you today, and four more with you tomorrow.

#1. The Christian life is made up of long and short paths. Looking at these labyrinths you’ll notice that some sections go on longer than others before turning. Life is like that too. Some trials, for instance, are short-lived, while others last much longer. (Joseph’s terrible ordeal lasted 13 years!) But each new turn leads us forward in God’s plan for our lives.

#2. All Roads, for the Christian, ultimately lead to God. And that’s the second thing these labyrinths teach us: all the roads we take, every twist and turn, each day of rain and each day of glorious sunshine, are all a part of God’s plan for us and are ultimately leading us to Him.

While pagan labyrinths were ‘multicursal’ (that is, having branches that could lead one of two ways), labyrinths found in Christian contexts were always ‘unicursal’ (they consisted of a single, continuous path). Even as the designs became more elaborate, Christian labyrinths are invariably unicursal.

Some believers may walk the path loudly and clumsily; others may walk it slowly and meditatively. And, no question about it, EVERYONE will stumble along the way! But, no matter how we walk it, each step is closing the distance between us and the day we’ll see God face to face.

As Paul says, “Salvation is nearer to us now than when we first believed” (Romans 13:11b).

#3. A labyrinth is not a maze! A labyrinth looks like a maze but it is not a maze. A maze is a puzzle to be solved. It has twists and turns and dead ends. A maze can be frightening – you can get lost in a maze! But the Christian life is not a puzzle, it’s a journey. A set journey. God’s journey.

God’s plan for His children has no dead ends. He’s always leading us forward.

If you “trust in the Lord with all your heart” and “do not lean on your own understanding” and “acknowledge Him” in all your ways, He WILL make your path straight (Proverbs 3:5-6).

Because the Christian life is not a maze, we can be confident that God will get us where He wants us to be. “He who calls you is faithful; HE will surely do it (1 Thessalonians 5:24, cf. Philippians 1:6).

And get this: since there’s only one path, once we’ve started out it is impossible for us to get lost. Well, wouldn’t you know Jesus gave us that very same assurance? We can rest secure in the truth that once God has found us, He will never, ever, ever lose us. Jesus settled the matter once-and-for-all in John 10:28-29: “I give them eternal life, and they will never perish, and no one will snatch them out of my hand. My Father, who has given them to me, is greater than all, and no one is able to snatch them out of the Father’s hand.”

And that, as they say, is that!

When has the road turned suddenly and unexpectedly?

How did God reveal His faithfulness to you in those times?

How does it make you feel to know that each step is bringing you closer to God?

Does it comfort you to know that once we’re truly saved, we can never be lost again?

How does this give you strength to live the Christian life?

Now consider each of these phrases individually. What do you think they mean? How do they relate to you?

“Besides this you know the time …”

“… the hour has come for you to wake from sleep.”

“… salvation is nearer to us now than when we first believed.”

“The night is far gone; the day is at hand.”

“So then let us cast off the works of darkness and put on the armor of light.”

Do you see how considering each phrase separately amplifies and illuminates its importance? What can this teach us about our approach to Bible reading?

How do these verses change the way you think about time? Are you making the most of the time God has given you?