Catching a Glimpse of the Glory 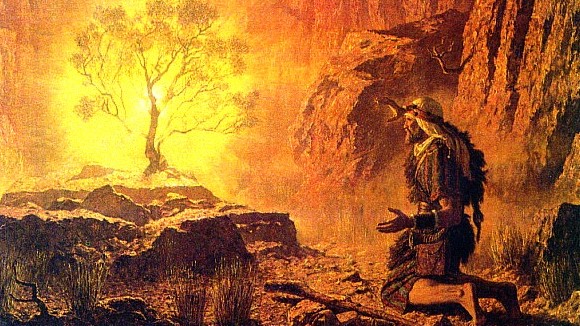 ‘Be practical!’ ‘Application, application, application!’ In seminary I learned that the key to preaching an effective sermon is practical application. Today, the focus of sermons is usually the audience: ‘What will he or she hear and will it matter to them personally?’ But this, I think, says more about the day in which we live than it does about preaching sermons that actually please God.

Reading the sermons of the early church fathers or the Puritan divines or even Jonathan Edwards or Charles Spurgeon, one finds that these sermons – sermons which radically impacted the societies in which they were preached – were God-centered in a way that many modern sermons are not. They were largely concerned with describing (with wonder) the eternal, incomprehensible God of the Bible. Oh sure, they sought to apply the Text, but that wasn’t the focus. The Text, not the audience, was of primary importance. The spotlight fell upon the words of the Text and the God who inspired them.

I don’t think Colossians 1:15-20 is very practical – except in as much as it shows me just how small I am (and how small my idea of God is).

“He is the image of the invisible God, the firstborn of all creation. For by him all things were created, in heaven and on earth, visible and invisible, whether thrones or dominions or rulers or authorities—all things were created through him and for him. And he is before all things, and in him all things hold together. And he is the head of the body, the church. He is the beginning, the firstborn from the dead, that in everything he might be preeminent. For in him all the fullness of God was pleased to dwell, and through him to reconcile to himself all things, whether on earth or in heaven, making peace by the blood of his cross.”

Immortal, invisible, God only wise,
In light inaccessible hid from our eyes,
Most blessèd, most glorious, the Ancient of Days,
Almighty, victorious, thy great Name we praise.
Unresting, unhasting, and silent as light,
Nor wanting, nor wasting, thou rulest in might;
Thy justice like mountains high soaring above
Thy clouds which are fountains of goodness and love.

To all life thou givest — to both great and small;
In all life thou livest, the true life of all;
We blossom and flourish as leaves on the tree,
And wither and perish—but nought changeth thee.

Great Father of glory, pure Father of light,
Thine angels adore thee, all veiling their sight;
All laud we would render: O help us to see
’Tis only the splendour of light hideth thee.

It seems to me that in writing this hymn Chalmers was not going for the practical. Rather, He was overwhelmed with the glory, the majesty, the other-worldliness of his great and glorious Creator and he wanted to exalt Him!

I have a sneaking suspicion that ‘wonder’ largely eludes modern believers. And that’s a problem. Because I believe that all true victory over the flesh and whole-hearted commitment to the work of Christ begins with a vision of His glory. Only when His ‘bigness’ truly eclipses my ‘smallness’ can God use me as He intends.

“Holy, holy, holy is the Lord of hosts;

the whole earth is full of his glory!”

And the foundations of the thresholds shook at the voice of him who called, and the house was filled with smoke. And I said: “Woe is me! For I am lost; for I am a man of unclean lips, and I dwell in the midst of a people of unclean lips; for my eyes have seen the King, the Lord of hosts!”

Then one of the seraphim flew to me, having in his hand a burning coal that he had taken with tongs from the altar. And he touched my mouth and said: “Behold, this has touched your lips; your guilt is taken away, and your sin atoned for.”

The apostle John encountered the risen and resurrected Christ in the Book of Revelation:

I, John, your brother and partner in the tribulation and the kingdom and the patient endurance that are in Jesus, was on the island called Patmos on account of the word of God and the testimony of Jesus. I was in the Spirit on the Lord’s day, and I heard behind me a loud voice like a trumpet saying, “Write what you see in a book and send it to the seven churches …

Then I turned to see the voice that was speaking to me, and on turning I saw seven golden lampstands, and in the midst of the lampstands one like a son of man, clothed with a long robe and with a golden sash around his chest. The hairs of his head were white, like white wool, like snow. His eyes were like a flame of fire, his feet were like burnished bronze, refined in a furnace, and his voice was like the roar of many waters. In his right hand he held seven stars, from his mouth came a sharp two-edged sword, and his face was like the sun shining in full strength.

When I saw him, I fell at his feet as though dead. But he laid his right hand on me, saying, “Fear not, I am the first and the last, and the living one. I died, and behold I am alive forevermore, and I have the keys of Death and Hades. Write therefore the things that you have seen, those that are and those that are to take place after this. As for the mystery of the seven stars that you saw in my right hand, and the seven golden lampstands, the seven stars are the angels of the seven churches, and the seven lampstands are the seven churches” (Revelation 1:9-11a, 12-19).

We often try to find victory over the sins that dog us – that so easily beset us. We screw up our confidence in the ability of our flesh to conquer it. We fail.

We hear a convicting sermon that challenges us to get serious about God’s work because the time is short and the night is far-spent. But we fail.

We desire to do these things, but the ability to do them often alludes us. Why? Might it be that we haven’t yet caught a glimpse of the ineffable glory of God?

Getting serious about ‘doing’ Christianity God’s way flows from an encounter with something that may seem impractical at first blush: a glimpse of the glory of the indescribable God.

John: “When I saw him, I fell at his feet as though dead. But he laid his right hand on me, saying, “Fear not, I am the first and the last, and the living one. I died, and behold I am alive forevermore, and I have the keys of Death and Hades. Write therefore the things that you have seen …” (Revelation 1:18-19).

Why do you think that their glimpse of God’s glory was immediately followed by a commission to do the Lord’s work?

Considering this, is it possible that the most fantastical portions of God’s Word may, in fact, be the most practical in the realm of the Spirit?