“As Moses Lifted Up the Serpent in the Wilderness …” 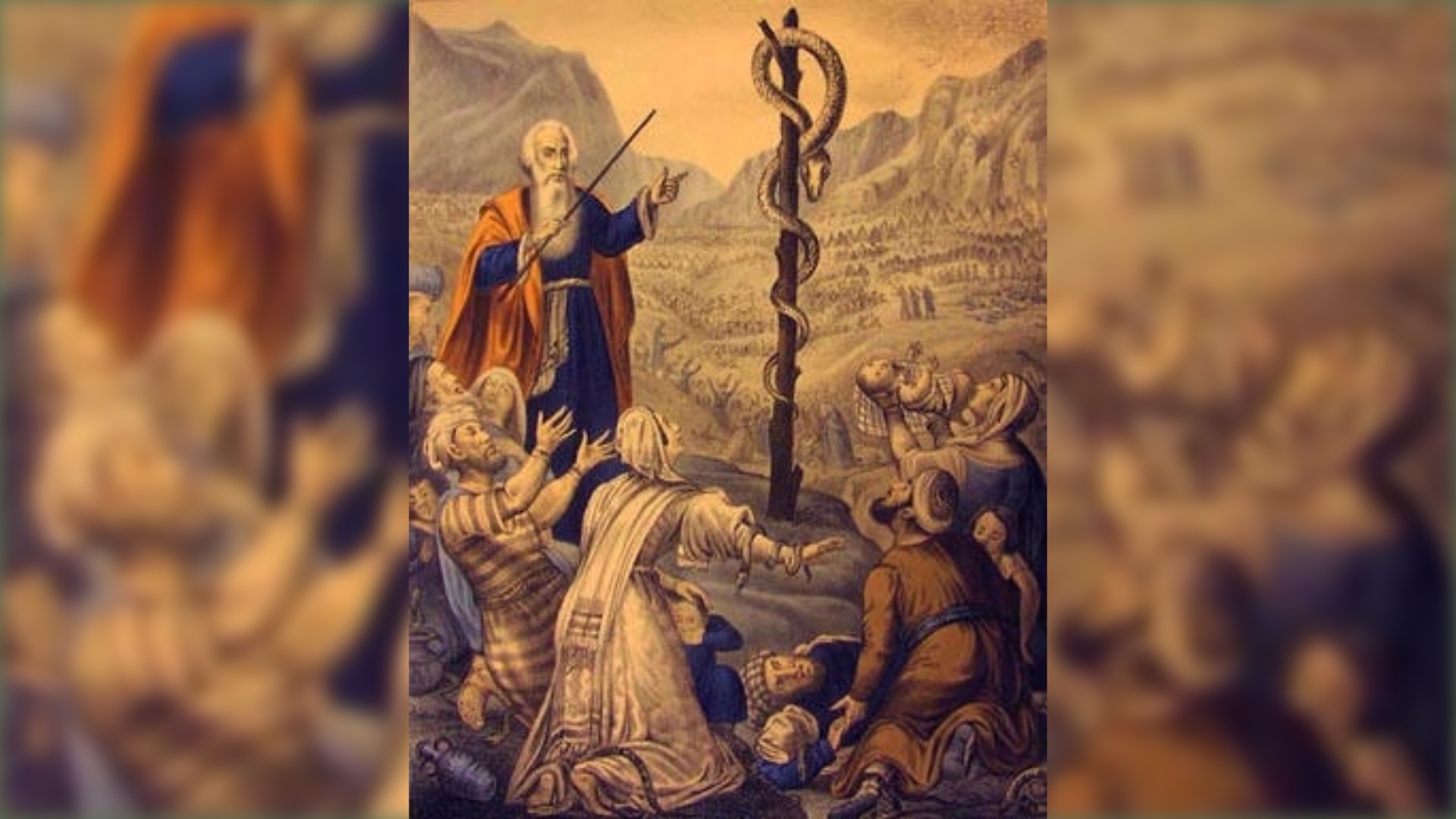 “And as Moses lifted up the serpent in the wilderness, so must the Son of Man be lifted up, that whoever believes in him may have eternal life” (John 3:14-15)

Over and over again, all throughout His earthly ministry, our Lord spoke about the Father’s desire to give life. What the apostle John and others call ‘eternal life’ has two important aspects: it’s both qualitative and quantitative. Unfortunately, the tendency is for readers, even committed Christian readers, to see ‘eternal life’ as merely forever life – that’s quantity. Eternal life means you will live forever, and that with God in the company of believers of every age.

But the life that God gives to us at the new birth is far more than that. It’s a “newness of life” that comes to us because we’re a “new creation” (Romans 6:4, 2 Corinthians 5:17). It’s an exuberant life – that’s quality. “I came,” Jesus said, “that they may have life and have it abundantly” (John 10:10b). He’s not just describing a life that lasts forever, although it is that. He’s describing a life that is exuberant.

The word exuberant is rich with meaning. It speaks of an effusive, uninhibited enthusiasm, that which is lavishly abundant. It’s something that’s abounding in vitality – Jesus’ “that they … may have it abundantly” – and it’s plentiful – characterized by the all-too-elusive word, ‘enough’. Exuberant refers to that which is extremely joyful – one of the Spirit’s fruits – and vigorous too – strong, and healthy, and full of energy. Christians know that we are strong because we draw our strength from a divine source. Finally, exuberant means to be profuse in growth and/or production, luxuriant and superabundant. Believers should always growing in the grace and knowledge of the Lord Jesus Christ – becoming more like Him as we move from glory to glory. Contentment, for instance, is a “learned” trait (cf. Philippians 4:12, Galatians 5:22, Philippians 4:13, 2 Peter 3:18).

This is the life – qualitative and quantitative – that comes to “whoever believes,” as Jesus said.

But in order for that to happen, “the Son of Man” must be lifted up even “as Moses lifted up the serpent in the wilderness.”

It was another difficult chapter in the history of the Children of Israel. They were wandering in the wilderness. They were jigging and jagging around the nation of Edom in order to avoid conflict with the Edomites. The people were tired and frustrated. And then they did a really bad thing: “the people spoke against God and against Moses” (Numbers 21:5a).  Not good.

And what did they say? “Why have you brought us up out of Egypt to die in the wilderness? For there is no food and no water, and we loathe this worthless food” (Numbers 21:5b). They called the divinely-provided manna, the bread from heaven, “worthless food” to be loathed.

They lifted their nose at God’s good gift, His supernatural provision – one that pictured the coming of the Lord Jesus, who would Himself say, “I am the bread that came down from heaven” (John 6:41).

When the people asked Jesus for a sign, they said, “What work do you perform? Our fathers ate the manna in the wilderness; as it is written, ‘He gave them bread from heaven to eat.’” Jesus then said to them, “Truly, truly, I say to you, it was not Moses who gave you the bread from heaven, but my Father gives you the true bread from heaven. For the bread of God is he who comes down from heaven and gives life to the world.” They said to him, “Sir, give us this bread always.” Jesus said to them, “I am the bread of life; whoever comes to me shall not hunger, and whoever believes in me shall never thirst” (John 6:30-35).

Jesus is the supernatural provision of God to all who live in the wilderness of this world. It was He who was pictured in the manna which the people loathed. And God, well, was furious about it!

“Then the Lord sent fiery serpents among the people, and they bit the people, so that many people of Israel died” (Numbers 21:6).

Snakes are gross. Period. They are, and have always been it seems, despised cross-culturally. In the Bible, of course, the snake is associated with Satan himself.

“[The snake] was the reminder and the emblem of the curse. It was through the agency of that old Serpent, the Devil, that our first parents were seduced, and brought under the curse of a Holy God. And on the cross … the holy One of God, incarnate, was made a curse for us. We would not dare make such an assertion, did not Scripture itself expressly affirm it. In Galatians 3:13 we are told, “Christ redeemed us from the curse of the law by becoming a curse for us—for it is written, ‘Cursed is everyone who is hanged on a tree.’” There was no flaw, then, in the type” (Pink, A. W., Exposition of the Gospel of John, Swengel, PA: Bible Truth Depot, 1923).

So, Satan’s first appearance in human history is serpentine. The near-universal revulsion of snakes no doubt dates all the way back to the Fall of man. One might imagine that this revulsion was even more pronounce in Moses’ time, being as it was closer to that event. But, even at the end of the book, Revelation 20:2, the enemy is still inextricably tied to the serpent. He is there called, “the dragon, that ancient serpent, who is the devil and Satan.”

When the people blasphemed God by calling His provision worthless, God judged them – and the instrument of that judgment was not only snakes, but “fiery” ones.

What is meant by this? What is a “fiery serpent”? The typical view is that the Hebrew phrase suggests venomous or poisonous snakes whose bite produces burning. So, the NIV translates the phrase, “venomous snakes”; others render it “poisonous snakes” (NLT, CEV, GNT, HCSB, ISV, NET).

“The “fire” was in their venom, of course … The poison in these snakebites must have been particularly virulent, leading to horrible, agonizing deaths” (Allen, R. B., in Numbers, F. E. Gaebelein, Ed., The Expositor’s Bible Commentary: Genesis, Exodus, Leviticus, Numbers, Grand Rapids, MI: Zondervan Publishing House, 1990, Vol. 2, pp. 875–879).

Well, that’s something of a ‘naturalistic’ explanation of what “fiery” means, but I’m not convinced that that’s all that’s happening here. This is, after all, a supernatural judgment. P.J. Budd, writing for the Word Biblical Commentary, has this to say:

“It is often supposed that there is a reference here to the venomous bite of the snakes, and the burning inflammation produced. [But] it is arguable that “fiery” is strictly a description of the creatures themselves, rather than of their bite” (Numbers in the Word Biblical Commentary, Dallas: Word, Incorporated, 1984, Vol. 5, pp. 232–235).

I agree, and prefer the view that “fiery” is actually a description of the snakes themselves rather than of their bite. The Hebrew word translated “fiery” is śārap, as in seraphim (which is its plural form). Seraphim are the six-winged angelic creatures we encounter in Isaiah 6. Literally, they’re the ‘burning ones.’

R.L. Harris argues that the “the verb is … always … used for a literal burning.” It’s used for burning sacrifices (Leviticus 4:12), burning cities (Joshua 6:24), the burning of children in the pagan practice of human sacrifice (2 Kings 17:31), etc. He writes:

“The word is used for destructive burning not usually for ordinary kindling of a fire or for metaphorical matters like burning with anger. [For that,] there are over fifteen other words in Hebrew meaning burn” (R. L. Harris, G. L. Archer Jr., & B. K. Waltke (Eds.), Theological Wordbook of the Old Testament, Chicago: Moody Press, 1999, p. 884).

Furthermore, Isaiah 14:29 and 30:8 make reference to the “flying fiery serpent,” perhaps a reference to their speed at darting. The respected Brown-Driver-Briggs Hebrew Lexicon even suggests that these may be the source of dragon myths of the ancient world., that these “beings” were “originally mythically conceived with serpents’ bodies” as “serpent-deities” (Brown, F., Driver, S. R., & Briggs, C. A., Enhanced Brown-Driver-Briggs Hebrew and English Lexicon, Oxford: Clarendon Press, 1977, p. 977).

I don’t know exactly what’s happening here, but I personally think it’s more than a burning sensation produced by a poisonous snake. This is a powerful and devastating judgement from the outraged Creator of all things. But, whether you think these “fiery serpents” were poisonous snakes or something more supernatural, here’s what we shouldn’t miss: they are describing a divine judgement by burning!

The cure to this divine judgment was curious to be sure! The antidote or antitoxin came by means of a bronze serpent fashioned by Moses and hoisted onto a pole.

And the people came to Moses and said, “We have sinned, for we have spoken against the Lord and against you. Pray to the Lord, that he take away the serpents from us.” So Moses prayed for the people. And the Lord said to Moses, “Make a fiery serpent and set it on a pole, and everyone who is bitten, when he sees it, shall live.” So Moses made a bronze serpent and set it on a pole. And if a serpent bit anyone, he would look at the bronze serpent and live” (Numbers 21:7-9).

This serpent was to be fashioned of bronze, which pictures judgment in the Bible. There was the brazen altar, the place where sacrificial animals were killed and then consumed by fire – Solomon famously offered 1,000 burnt offerings upon it in 2 Chronicles 1:6! And then there’s Deuteronomy 28:15, 23a, where God warned the people, “If you will not obey the voice of the Lord your God … the heavens over your head shall be bronze …”

Furthermore, Moses could not simply hoist one of the actual “fiery” snakes onto the pole, for those snakes contained within them that which had killed the people. In the same way, Jesus was perfect God and perfect Man in one glorious Person, and was without sin. He did not have within Him the ‘poison’ (sin) that killed those He was hoisted to save (us). “For our sake he [the Father] made him [Jesus] to be sin who knew no sin, so that in him [Jesus] we might become the righteousness of God” (2 Corinthians 5:21, brackets mine).

The Upward Look of Faith

So, what was required of the people to abate the divine judgment upon them?

An upward look of faith.

“… everyone who is bitten, when he sees it, shall live…

And if a serpent bit anyone, he would look at the bronze serpent and live” (Numbers 21:8-9).

The point is, we’ve all been bitten by sin. And God loves us so much that He gave His Son Jesus to die in our place. And now, all who will simply look to Jesus in faith will live, really live – not only forever, but exuberantly.

Moses, following God’s command, did not instruct the people to bring an offering, nor work out some self-solution, nor trust in the leader, Moses, nor any other thing. He simply instructed the people to look.

That’s why Jesus told the bewildered Nicodemus, “As Moses lifted up the serpent in the wilderness, so must the Son of Man be lifted up, that whoever believes in him may have eternal life” (John 3:14-15).

Exuberant, forever-life comes to sinners by nothing more than an upward look of faith. Father, thank you that it does.

Have you done this? What was that experience like for you?

What fruit do you see in your life that evidences a new creation?

Is it limited to quantity (‘forever life’), or does it include quality of life?

Do you see eternal life as a future thing, or something to be experienced now?

What do you think of the idea that the life Jesus promises is an exuberant life?

Do you walk in the experience of this life? Why or why not?

What might you do to deepen the richness of your walk with God?