The Word Became Flesh and ‘Tabernacled’ Among Us 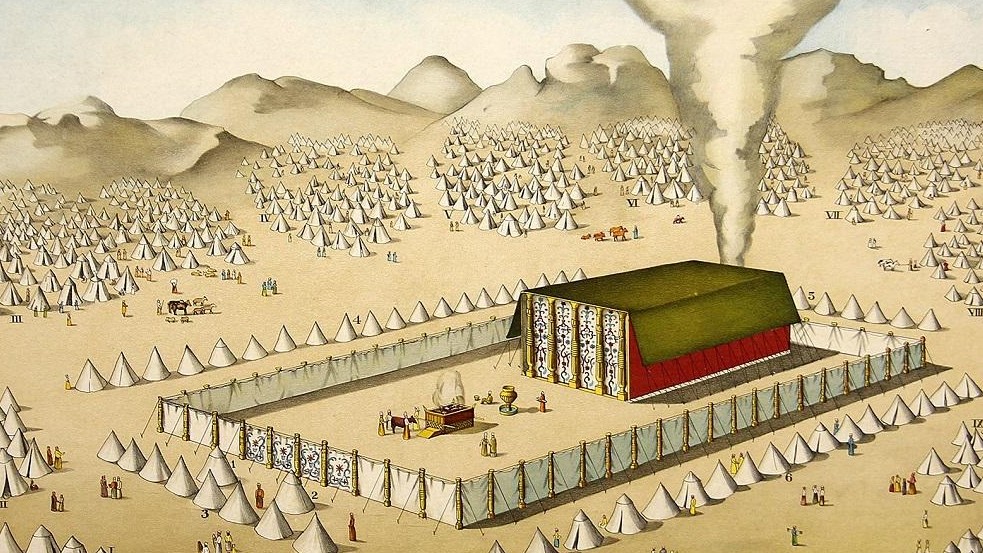 John likes symbolism, as even a surface reading of the Book of the Revelation of Jesus Christ will readily show. But John’s Gospel has its allusions and symbols too.

One of these we find in the jaw-dropping declaration of John 1:14: “And the Word became flesh and dwelt among us, and we have seen his glory, glory as of the only Son from the Father, full of grace and truth.” The word “dwelt” in this verse (Greek, σκηνόω) wants to pull us back to the Old Testament wilderness wanderings of Israel where the glory of God dwelt among the people in a movable tent called the Tabernacle.

Similar to the way “God’s presence was in the Tabernacle (Exodus 40:34), so Jesus dwelt among people” (Blum, John, in The Bible Knowledge Commentary: An Exposition of the Scriptures, Vol. 2, p. 273).

This passage is literally telling us that Jesus – the very glory of God – “tabernacled” among us. Much has been written about the significance of this, and rightly so! But no one to my mind has laid it out more succinctly than Arthur W. Pink in his wonderful commentary on John’s Gospel (Exposition of the Gospel of John, Swengel, PA: Bible Truth Depot, 1923).

The similarities between the Old Testament Tabernacle and the “tabernacling” of Jesus among men listed below summarize Dr. Pink’s fine work. Wherever you find lines in quotations, they’re direct quotes from him; the brackets are mine.

In Jesus, God pitched His tent among us for thirty-three years. The Tabernacle that God instructed Moses to erect for Him in the wilderness foreshadowed the coming Christ in many ways. In fact, virtually every thing about the Tabernacle pointed to the coming of Jesus Christ! Notice a few of these:

Pink goes on to describe “a series of striking contrasts between the wilderness Tabernacle and Solomon’s Temple” in the way that each of these foreshadow the coming of Christ. Here are some of them:

Now, these wonderful foreshadowings remind us of the supernatural divine inspiration of the Bible. It is no mere book! In an article about the unity of the Bible (Unity of the Bible: Seven Compelling Evidences, July 27, 2014), Tim Chaffery writes:

“Among all the books ever written, the Bible is absolutely unique. Actually, it is not just a book—it’s 66 books. And one of its most remarkable qualities is the complete unity of the overall message despite having so many different authors writing over many centuries on hundreds of controversial subjects. Natural explanations fail to account for the supernatural character and origin of Scripture.

The Bible was written over a period of roughly 2,000 years by 40 different authors from three continents, who wrote in three different languages …

Shepherds, kings, scholars, fishermen, prophets, a military general, a cupbearer, and a priest all penned portions of Scripture. They had different immediate purposes for writing, whether recording history, giving spiritual and moral instruction, or pronouncing judgment. They composed their works from palaces, prisons, the wilderness, and places of exile while writing history, laws, poetry, prophecy, and proverbs. In the process they laid bare their personal emotions, expressing anger, frustration, joy, and love.

Yet, despite this marvelous array of topics and goals, the Bible displays a flawless internal consistency. It never contradicts itself or its common theme.

From Genesis to Revelation, we see man’s repeated rebellion against his holy Creator. God made a perfect world, but mankind has continually rejected His authority and sought to decide truth for himself. Nevertheless, God promised to extend His love, grace, and mercy to unworthy people who deserved to be cast into the lake of fire for all eternity.

Early in Genesis after Adam and Eve sinned, God made known His plan of redemption, which He repeatedly promised and expanded upon throughout the Old Testament. The promises were fulfilled in a surprising, but predicted way: by the Savior’s sacrificial death and subsequent resurrection, as recorded in the New Testament. The Bible then announced the future culmination of the Savior’s redemptive work in [the Book of] Revelation.”

God has fulfilled the promises He made in His Word by sending His Son Jesus into the World! “The Word became flesh and tabernacle among us, and we have seen his glory, glory as of the only Son from the Father, full of grace and truth!”

What are some of the promises that God has made to you?

Do you believe He will fulfill every one?

Think About Peter’s response in John 6 after many of Jesus’ disciples had left Him. “Jesus said therefore to the twelve, “You do not want to go away also, do you?” Simon Peter answered Him, “Lord, to whom shall we go? You have words of eternal life” (John 6:67-68).

How would you characterize the words of God found in the Bible?

Are they the very “words of eternal life” to you as they were to Peter?

Is reading them a part of your daily routine?

If not, why not? What does this tell you about where you are spiritually? What might you do to change this?