The Blood That Delivered Us, and Keeps Delivering Us 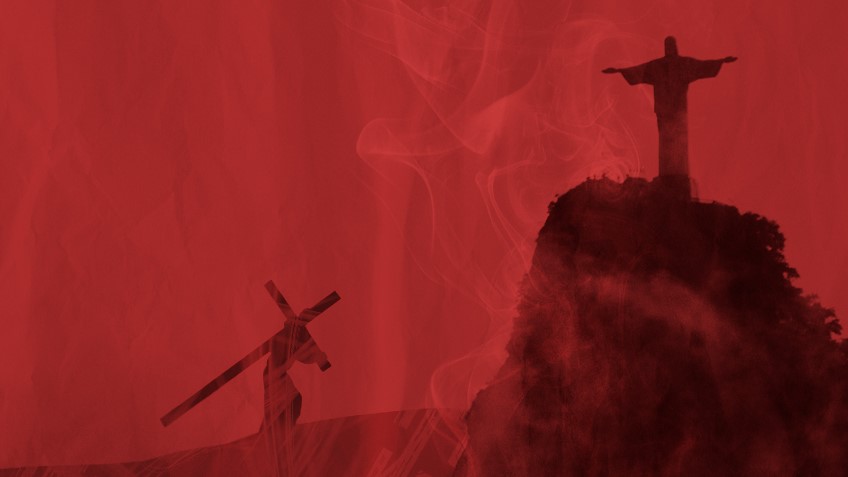 In Micah 6, the Lord calls upon the mountains and the hills to witness His accusation against His people. Why have they been so unfaithful? Why have they abandoned Him for other gods, for idols? Why have they walked away from His love? The Lord has an indictment to bring! But, despite their unfaithfulness, He still calls them, “my people.”

Through a series of questions, He asks them to consider their ways.

Hear what the Lord says:

Arise, plead your case before the mountains,

and let the hills hear your voice.

Hear, you mountains, the indictment of the Lord,

and you enduring foundations of the earth,

for the Lord has an indictment against his people,

and he will contend with Israel.

God reminds His people that He’s freed them from slavery and delivered them into freedom. And Israel’s deliverance is a picture of the believer’s deliverance. We’ve been brought into a new relationship with the Father because Jesus has borne our sin. “He has delivered us from the domain of darkness and transferred us to the kingdom of his beloved Son, and delivered us from the kingdom of darkness” (Colossians 1:13).

What More Could God Have Done?

With that in mind we might wonder, ‘What more could He possibly have done for us?’ Well, as it turns out, He’s done even more than that!

He’s not only led us out of slavery, but “His divine power has granted to us all things that pertain to life and godliness … by which He has granted to us His precious and very great promises …” (1 Peter 1:3-4). He’s not only given us eternal life, but He’s also given us everything we need to experience the richness of resurrection life right now!

Having so loved His people, the Lord has a legitimate complaint here, right?

Using the word “redeemed,” God evokes the Passover, which He used to deliver the nation from its slavery in Egypt. The “destroyer” was coming with judgment and would kill the firstborn of each and every unbelieving family. Their sin had brought God’s judgement down upon their heads. The only people who would be safe that night would be those who took “some of the blood and put it on the two doorposts and the lintel” of their homes (Exodus 12:7).

When we come to the Father by faith alone in Christ alone we’re essentially doing the same thing: We’re applying the blood of God’s Lamb to the entrance of our hearts – and His blood satisfies the righteous demands of the Father. Therefore, God’s judgement once-and-for-all passes over us. “There is therefore now no condemnation for those who are in Christ Jesus” (Romans 8:1).

Aren’t you glad for that?

The Lamb and the Fire

Safe inside the house on the night of the Passover, the people of God were to do something else as well. They were to “eat the flesh [of the sacrificed Lamb] that night, roasted on the fire; with unleavened bread and bitter herbs” (Exodus 12:7-8).

The “fire” speaks of the judgement that the lamb endured to deliver the people. The “bitter herbs” speak of the difficult life they endured in slavery. The “unleavened bread” speaks of the swiftness with which they left Egypt – the bread had no time to rise!

Jesus is God’s Lamb and ours! John the Baptist declared as much to his followers. “[John] saw Jesus coming toward him, and said, “Behold, the Lamb of God, who takes away the sin of the world!” (John 1:29)

Failing to understand, many of those who followed Jesus were deeply offended when He suggested they eat His flesh and drink His blood. “When many of his disciples heard it, they said, “This is a hard saying; who can listen to it?” … After this, many of his disciples turned back and no longer walked with him” (John 6:60, 66).

The Power of the Blood

But it is only through the blood of Jesus that we can stand in the Father’s presence. “We have confidence to enter the Most Holy Place by the blood of Jesus” (Hebrews 10:19). For the Father has reconciled all things to Himself, “whether things on earth or things in heaven, by making peace through his blood, shed on the cross” Colossians 1:19).

On the night of the Passover, God’s people were to apply the blood of the sacrificed lamb upon the doorposts and lintel of their houses and then eat the flesh of the lamb which had passed through the fire. The fire, God’s judgment, fell upon the lamb, not upon the people. And the people who had escaped judgement received the lamb – ate it, with all its life-giving nourishment.

Finally, all these lines of God’s redemptive plan converged upon one Man in one room on one night – the night that Jesus celebrated His final Passover with His disciples.

“Now as they were eating, Jesus took bread, and after blessing it broke it and gave it to the disciples, and said, “Take, eat; this is my body.” And he took a cup, and when he had given thanks he gave it to them, saying, “Drink of it, all of you, for this is my blood of the covenant, which is poured out for many for the forgiveness of sins. I tell you I will not drink again of this fruit of the vine until that day when I drink it new with you in my Father’s kingdom” (Matthew 26:26-29).

It’s no wonder then that Paul declares, “Christ our Passover … has been sacrificed” (1 Corinthians 5:7).

But there’s more! While we apply the blood of Jesus to our hearts at the moment of salvation for eternal life, the power of Christ’s blood in us doesn’t end there! For we apply it again each and every time we confess our sins to the Father. It’s the cleansing blood of Jesus that restores us to fellowship with God.

“If we walk in the light, as He is in the light, we have fellowship with one another, and the blood of Jesus his Son keeps on cleansing us from all sin” [literal rendering of 1 John 1:7; present active indicative third person singular of καθαρίζω, from which we get our English word ‘catharsis’].

Furthermore, believers are enjoined to remember the sacrifice of the Lamb slain for our sins in perpetuity. This we do in the celebration of the Lord’s Table.

“For I received from the Lord what I also delivered to you, that the Lord Jesus on the night when he was betrayed took bread, and when he had given thanks, he broke it, and said, “This is my body, which is for you. Do this in remembrance of me.” In the same way also he took the cup, after supper, saying, “This cup is the new covenant in my blood. Do this, as often as you drink it, in remembrance of me.” For as often as you eat this bread and drink the cup, you proclaim the Lord’s death until he comes” (1 Corinthians 11:23-26).

How Would We Answer?

So then, how would we answer the Lord’s indictment?

No, Lord, you have not wearied us! You have loved us, delivered us, given all for us, lavished mercy upon us, and been patient with us through all of our wanderings.

O Lord, merciful Lord, draw us back to yourself! Cleanse us again with the blood of your Son Jesus. And help us to never again leave your love.

What part does confession play in your spiritual life? Is it regular or irregular? If confession is necessary for restoring fellowship with God when we sin, how regular should it be?