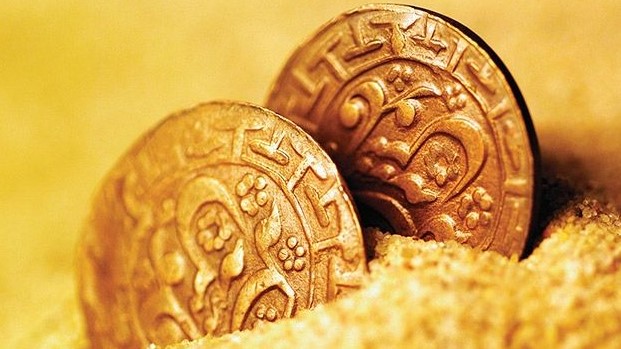 So, Jesus tells a story.

It’s a story about a “man” [hint: the “man” is Jesus Himself] who’s going away for a time, but is coming back. He calls His servants and entrusts to them a certain amount of money that he expects them to invest on his behalf while he’s away. To one he gives five “talents,” to another two, to another one, to each according to his ability to manage it.

A “talent” in the Bible is not the ability to whistle God Bless America while juggling flaming bowling pins and standing on one leg atop a unicycle. Of course, that’s a talent! And AWESOME talent, too! But the talent Jesus was talking about here was a ‘talent of money,’ a certain amount of silver. And, as it turns out, a talent was A LOT of money. A single talent, according to some scholars, was equal to 20 years of wages for a common worker. That’s a LOT of cabbage, as they say in the grocery business!

Anyway, the “man” is going away for a while [remember: Jesus is the MAN], and he wants to keep his money growing. So, he gave it to his “servants” [Hint: us] to invest on his behalf while he is away.

Oh well, that’s OK, I guess. Unless, of course, the “man” ACTUALLY COMES BACK and requires and accounting of his cabbage! In Jesus’ story, HE DID!

So far, so good. Happy happy happy! But then the master approached the third servant …

“He who had received the one talent came forward, saying, ‘Master, I knew you to be a hard man, reaping where you did not sow, and gathering where you scattered no seed, 25 so I was afraid, and I went and hid your talent in the ground. Here, you have what is yours.’ 26 But his master answered him, ‘You wicked and slothful servant! … [Y]ou ought to have invested my money with the bankers, and at my coming I should have received what was my own with interest. 28 So take the talent from him and give it to him who has the ten talents. 29 For to everyone who has will more be given, and he will have an abundance. But from the one who has not, even what he has will be taken away. 30 And cast the worthless servant into the outer darkness. In that place there will be weeping and gnashing of teeth.’”

Now, here’s the rub: This third servant wasn’t really a believer. He didn’t know His Master at all; he saw him only as “a hard man.” That’s the reason he buried his master’s money rather than invest it: he never really thought he was coming back. And, he figured, ‘When he doesn’t return, since there’s not even a record of it at the bank, all of that $$$ will be mine!’

At the moment of salvation, God the Holy Spirit gave each if us gifts (plural). He expects us to invest those gifts into the Kingdom until the Lord returns. We use them to tell others about Jesus saving love and to invite them to be a part of God’s family. We use them to encourage and serve our brothers and sisters in the difficult journey of life that we share together.

But, don’t miss this: God DOES expect us to use them and not bury them! And, by the way, He IS COMING BACK (soon)!’