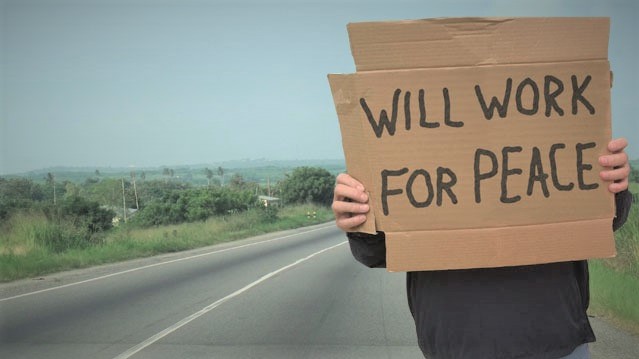 Biblical peace is not only the absence of bad; it’s also the presence of good. It means more than just ‘not’ fighting with my neighbor, but its actively working for his good.

John the Baptist came with a powerful message of warning. Watch it carefully: “He said therefore to the crowds that came out to be baptized by him, “You brood of vipers! Who warned you to flee from the wrath to come? 8 Bear fruits in keeping with repentance. And do not begin to say to yourselves, ‘We have Abraham as our father.’ For I tell you, God is able from these stones to raise up children for Abraham. 9 Even now the axe is laid to the root of the trees. Every tree therefore that does not bear good fruit is cut down and thrown into the fire.” 10 And the crowds asked him, “What then shall we do?” 11 And he answered them, “Whoever has two tunics is to share with him who has none, and whoever has food is to do likewise” (Luke 3:7-11).

Did you catch that? When the crowds asked him what they should do, John, having just breathed out a warning of impending judgement, talked about sharing: “Whoever has two tunics is to share with him who has none, and whoever has food is to do likewise.”

This is what peacemakers do. Peace is not only the absence of conflict; it also involves concern for our brothers and sisters, our neighbors, and even those who consider themselves our enemies. It’s working for the good of another. Restoring things to wholeness, completeness. It’s laboring to fix what’s broken.

So, John’s answer is startling – especially in the context of his sermon! He called those who would prepare themselves for the soon-to-come Messiah to set their hearts to restoring things.

He encouraged them toward a sort of economic justice: ‘If it has pleased the Lord to give you an abundance, share generously with those who lack.’

Notice, though, John did not call for this economic justice to come through some expansive government program, but rather through the generous, individual sharing of those whose hearts had been captured by God.

He encouraged them to do whatever they can to make things whole, complete, right with those who are around them – to bring peace, shalom.

Paul echoes this idea as well – that peace is more than just the absence of conflict, but the presence of good. He gives us two examples in Ephesians 4:28-29.

First, he says, “Let the thief no longer steal, but rather let him labor, doing honest work with his own hands, so that he may have something to share with anyone in need.”

Do you see it?

It’s not enough to ‘not’ steal. The one whose heart has been captured by God should “labor, doing honest work with his own hands, so that he may have something to share with anyone in need.

Second, he says, “Let no corrupting talk come out of your mouths, but only such as is good for building up, as fits the occasion, that it may give grace to those who hear.”

Did you see it that time?

It’s not enough to ‘not’ gossip or slander. The one who’s heart has been captured by God should speak words that are “good for building up, as fits the occasion, that it may give grace to those who hear.”

It’s love that propels us forward as God’s children to remove the things that offend and to labor in those things that bring wholeness to those around us. Of course, the Gospel is at the center of God’s peace-making work! So, we share the Gospel, and our time, and our possessions to help bring peace to those it pleases the Lord to set in our path. We do our small part to love generously, to make what is wrong right, and what is lacking, whole.

For, as our Lord said, “Blessed are the peacemakers, for they shall be called sons of God” (Matthew 5:9).