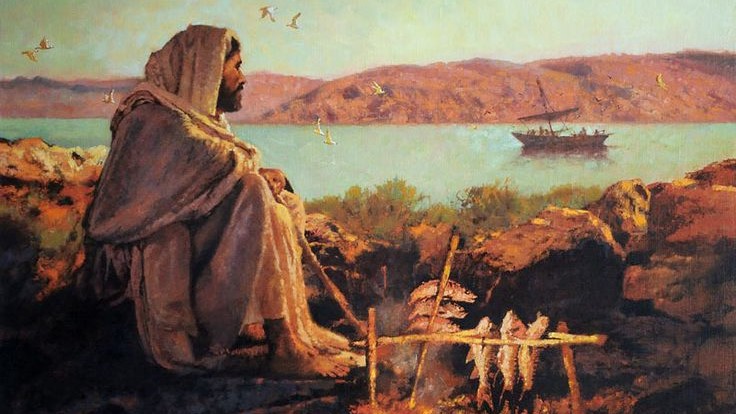 “Just as day was breaking, Jesus stood on the shore; yet the disciples did not know that it was Jesus. 5 Jesus said to them, “Children, do you have any fish?” They answered him, “No.” 6 He said to them, “Cast the net on the right side of the boat, and you will find some.” So they cast it, and now they were not able to haul it in, because of the quantity of fish. 7 That disciple whom Jesus loved therefore said to Peter, “It is the Lord!” When Simon Peter heard that it was the Lord, he put on his outer garment, for he was stripped for work, and threw himself into the sea. 8 The other disciples came in the boat, dragging the net full of fish, for they were not far from the land, but about a hundred yards off. 9 When they got out on land, they saw a charcoal fire in place, with fish laid out on it, and bread. 10 Jesus said to them, “Bring some of the fish that you have just caught.” 11 So Simon Peter went aboard and hauled the net ashore, full of large fish, 153 of them. And although there were so many, the net was not torn. 12 Jesus said to them, “Come and have breakfast” (John 21:4-12).

His disciples had followed Him for three years or so now – walked with Him, ate with Him, traveled with Him. But everything had changed so suddenly. It had been a confusing time to be sure. Jesus had ridden into Jerusalem like a gentle king peacefully conquering. He’d taught in the environs of the Temple and been opposed by Israel’s religious leaders. Then there was the Supper when He told them that He’d been betrayed. But, more than that, He’d been betrayed by one of the Twelve!

That was the night that Judas went out.

Later, Peter denied three times publicly that he even knew Him. Then there were the trials. Then the scourging. The Centurion blanket party. Then the crown of thorns. And the nails. And the astonishing reality of watching their Master nailed to a cross, publicly shamed, mocked and spat upon by godless men.

We don’t know when the events of John 21 took place. Some scholars see it as an anticlimactic epilogue to the events of John 20. Some even argue that John didn’t write it at all, but that it was added on later by the elders at Ephesus. There’s no reason to believe that John didn’t write it, though. In fact, it is in perfect sync stylistically with the rest of John’s Gospel.

But I think all of this misses the point.

I think John 21 is the perfect way for the Apostle to end His Gospel! Why? Because in it he records Jesus’ wonderful invitation – one that still reverberates with disciples 2000 years removed from its first utterance: “Come and have breakfast!”

Breakfast, with all the fellowship that that word evokes.

Breakfast, with all its nourishment and life-giving nutrition.

Breakfast, with its celebration of the new day – another day that the Lord has given us to glorify Him in the eyes of those who need to know Him!

Breakfast, with its reminder that we who have believed have been made sons of the day and of the light!

Breakfast, with its new glimpse of the God of Heaven, it’s new challenge to walk before Him in purity and its new promise of His abiding presence.

O, child of the living God, do you hear His invitation – this and every new day? “Come and have breakfast.”

Our Lord longs to meet with us at the fire, to talk about important (though sometimes awkward) things. To set our hearts aright and watch as they flame up!

O, Come – warm your cold heart by His fire. Rest your tired head upon Him. Let the astonishing truth that your crucified Master lives give new life to your bones.

What will you do there?

What will you and Jesus talk about?

What will you expect from Him?

How do they measure up in importance against sitting with Him by the fire, doing what He called the one “necessary” thing? (See Luke 10:38-42.)